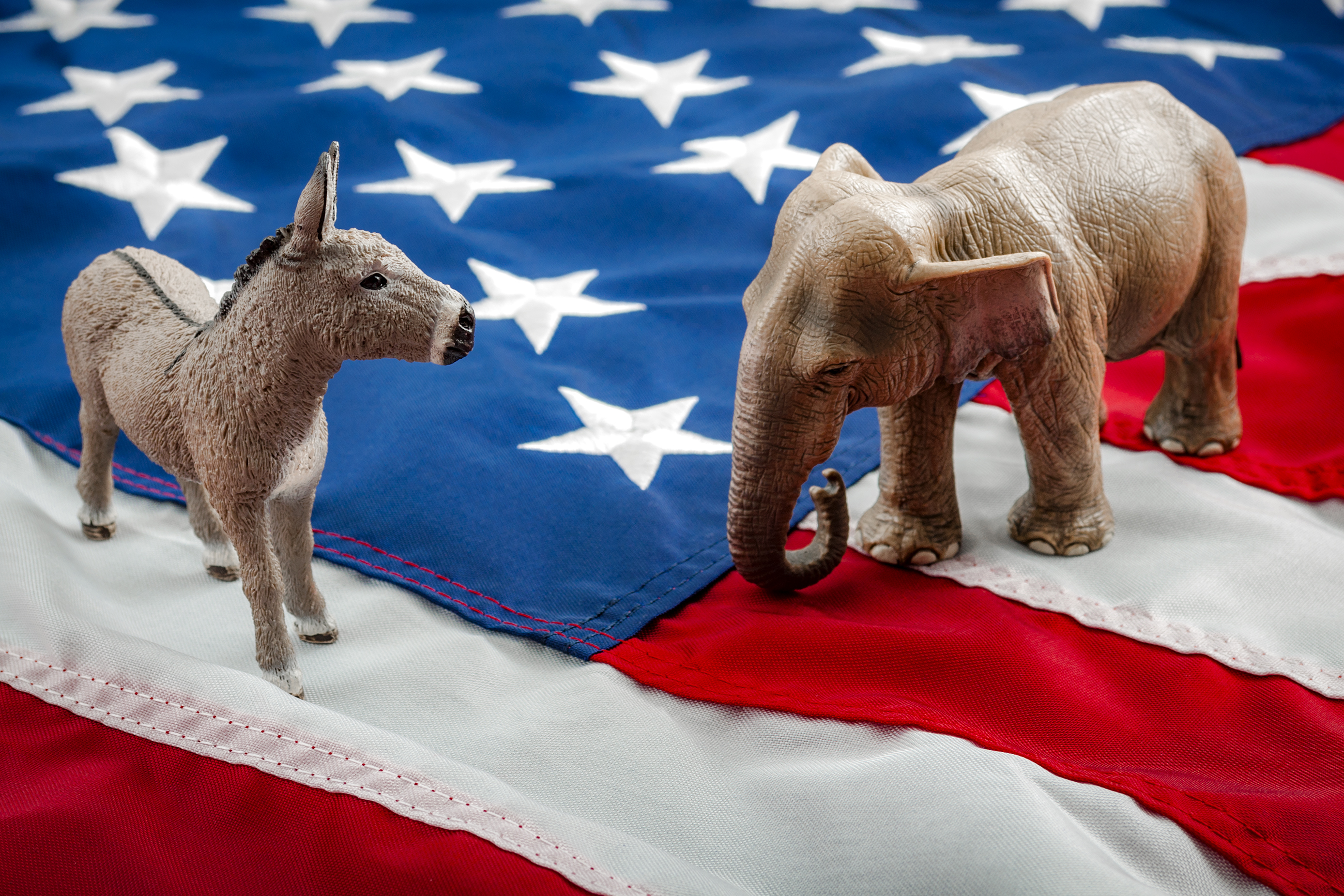 This article examines the US political process and the duopoly party system within a vast array of state strategies and elite manipulation. It contends that analyses of the political process as a real engine of change and that significant differences within the two-party system are flawed because they do not account that they serve as mechanisms for how power and dominance in maintained and reproduced.

By taking seriously the idea that the 2016 presidential election exposes the lack of trust and ultimate legitimacy of rule by the duopoly party system, we can attempt to understand the structure of power and domination in the United States. Bernie Sanders and Donald J. Trump were both widely explained as anti-establishment candidates, because of their alleged outsider statuses.  Yet, Sanders had been in Congress for over 25 years and Trump is considered a member of the 1%. It might be accurate to view these attempts at populism as still occurring within the duopoly party system. Sanders’ slogan about bringing forth “The Political Revolution” a version of socialism, situated in New Deal Keynesianism, whose aim is to smoothen the jagged edges of the brutal capitalist system. Whereas, Trump’s slogans to “Make America Great Again” and to “Drain the Swamp” includes promises to restore the US to its rightful prosperous place, with mixed-messages on anti-neoliberal and anti-neoconservative intervention policies. Trump’s campaign also featured nativist and xenophobic rhetoric, reminiscent of political leaders generating emotional excitement and fear during economic declines. A critical observation can point out that to varying degrees much of Trump’s rhetoric is already institutionalised and represented in both the Democratic and Republican parties’ domestic and foreign policies – e.g.,  mass (targeted) incarceration, the “war on drugs”, and the “war on terror” are widely thought of as policies that ethno-racially profile and vilify particular groups of individuals.

Political parties attempts at appealing to populism to gain the support and “allegiance of the fickle crowd” and presenting themselves as the most “in touch” with popular concerns (Hitchens 2012) is in fact nothing new. It is very difficult to argue that these so-called insurgent candidates broke from what is largely considered the establishment. Aside from campaign promises, both candidate’s subjugation to the establishment is confirmed. Let’s take just two crucial aspects; their commitment to neoliberal policies (with a tinker here or there) and to a neoconservative foreign intervention policy based on a humanitarian pretext or otherwise.  In fact, what is currently underway in the president elect Trump’s soon to be administration is the recycling of the established bureaucracy of politicians, military leaders, and the business elite. So in this regard, we are merely addressing elite manipulation. One can only surmise what a Sanders administration would have looked like had a democratic process occurred during the DNC primary and he had won the presidential election. All indications are, not much! After all, he pledged his allegiance to the Democratic Party before, during, and after his defeat. In fact, there was never any real indication that he would be radically different than the standard issue center-right democrat, such as a Hillary Clinton or Barack Obama.

So with the great fanfare of emotions that president elections bring, so too follows the eventual drying up of aspirations for change. With the soon to be new president in office, neither will the Red Sea part nor will Armageddon arrive. Although the Trump campaign illustrates his success in out maneuvering both the Republican and Democratic brands of elite populisms, the power structure is poised to continue as usually. It is in this way, power and domination is maintained and reproduced by elite manufactured populism, which both parties engage in during election cycles. On the surface, largely the opinion of the corporate media and bipartisan academics is that a Trump’s presidency demonstrates a crisis in their respective established parties’ ability to gain the necessary amount of votes due to ineffective messaging and campaigning. In the case of the Democratic Party, the blame is now focused on Russian government interference in the election. Yet, still, some have explained the outcome of the election along racial lines as revealing the racial character in the US and a racial backlash to the election of Obama. While others have focused on the class character among the discontent and their sense of being left behind as the driver for voting for Trump. Yet, still, others emphasise the intersectionality of race and class in understanding the outcome. However, a deeper analysis points more to how the outcome of the election demonstrates a crisis in the legitimacy of the duopoly party system in which many just do not view as a viable means for change. At this moment, it is extremely difficult to imagine that after Trump is disciplined and briefed by the power elite he will do anything, but play by the rules of the game.