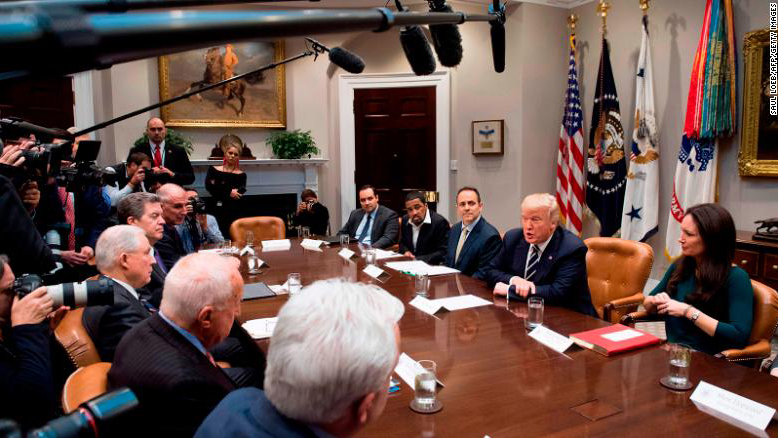 Hillary Clinton described half of Donald Trump’s base as “deplorables” holding racist attitudes. Indeed, many of Trump’s policies do negatively target people of color and leave working Americans worse off. But is the question of whether Trump is a racist not a distraction for a bigger elephant in the room?

On 11 January 2018 while discussing immigrants from Haiti, El Salvador and African countries United States president Donald Trump was quoted as asking, “Why are we having all these people from shithole countries come here?”

United Nations human rights spokesman Rupert Colville was quick to denounce Trump: “There is no other word one can use but racist. You cannot dismiss entire countries and continents as “shitholes”, whose entire populations, who are not white, are therefore not welcome.”

Democratic senator Dick Durbin – who was at the meeting with Trump – affirmed the quotation: “Shithole was the exact word used once not twice but repeatedly.”

Trump denied the quotation attributed to him, and he denied being a racist. Republican senator David Perdue, who was also at the meeting, called Durbin’s claim “a gross misrepresentation.”

Nonetheless, criticism of Trump was widespread. The effect will be minimal as Trump appeals to a different base. He plays the patriot’s card to curry favor with the working masses. Hence his nostalgic campaign slogan was “Making America Great, Again?”

What was Trump’s plan to reestablish the greatness of America?

PolitiFact noted that Trump’s campaign promises were targeted at changes to immigration, trade, taxes and foreign policy.1 Of the top 10 campaign promises, five are clearly aimed against non-White countries.

The pledge to build a wall along the U.S.–Mexican border hearkens to keeping brown-skinned Mexicans out; and to up the ante, Trump stated he’d even make Mexico pay for the wall. Mexico is a country that the US fought, defeated, and forced to cede over half its territory.

PolitiFact noted that Trump’s campaign promises were targeted at changes to immigration, trade, taxes and foreign policy.1 Of the top 10 campaign promises, five are clearly aimed against non-White countries.

A second promise was to temporarily ban Muslims from entering the U.S. And on 27 January 2017, Trump signed an executive order halting all refugee admissions and temporarily barring people from seven Muslim-majority countries: Iraq, Syria, Iran, Libya, Somalia, Sudan and Yemen. All are countries that the U.S. has attacked militarily in recent times.

Trump called for tariffs on goods made in China and Mexico. China represents the largest trade deficit for the U.S. But why Mexico? The U.S.’s trade deficit with Mexico is smaller than that with the European Union (or even just Germany).2 Hence, the call for imposing tariffs appears ethnically targeted, although Japan, the U.S.’s third largest trade deficit partner, is excluded from the call for imposing tariffs. Japan is a crucial lynchpin for US military objectives in East Asia.

Kim Petersen is an independent writer whose writing has appeared in several ezines, newspapers, magazines and books. He was an Original Peoples editor for the Dominion grassroots newspaper and a co-editor with the Dissident Voice newsletter.

3. See 2016 figures for “List of the largest trading partners of the United States,” Wikipedia. https://en.wikipedia.org/wiki/List_of_the_largest_trading_partners_of_the_United_States .

6. I discuss this in some depth in “Sovereignty in the South China Sea,” Dissident Voice, 7 June 2016. https://dissidentvoice.org/2016/06/sovereignty-in-the-south-china-sea/ .

9. Emma Green, “It Was Cultural Anxiety That Drove White, Working-Class Voters to Trump,” The Atlantic, 9 May 2017. https://www.theatlantic.com/politics/archive/2017/05/white-working-class-trump-cultural-anxiety/525771/

13. Who should determine the designation of a continent: the people who have resided there since time immemorial or newcomers from the continent of Europe? Europeans chose the designation “North America” after one of their citizens. “Turtle Island” is a designation stemming from the legends of Indigenous peoples. See Kim Petersen, “America: The Morality of a Geopolitical Designation,” Dissident Voice, 6 August 2014. https://dissidentvoice.org/2014/08/america-the-morality-of-a-geopolitical-designation/