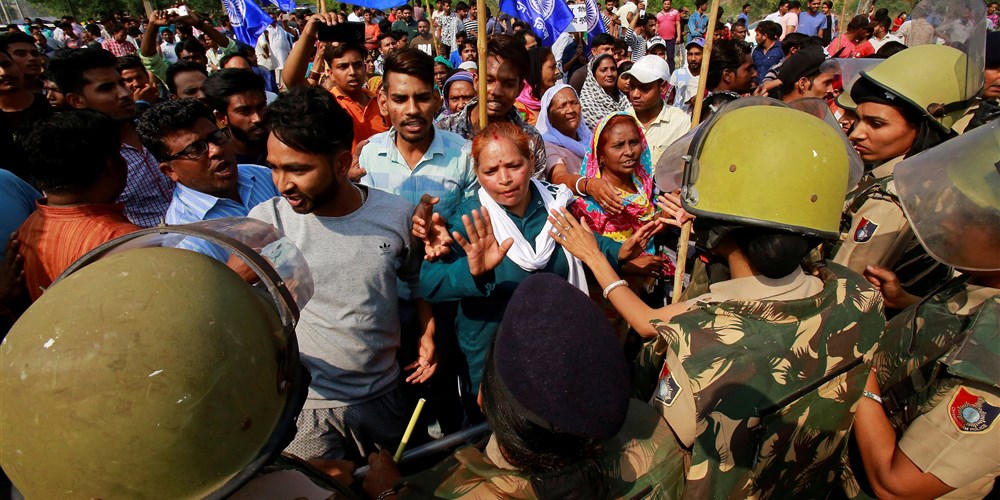 Combining historical knowledge and awareness of the present situation in America and India, one can deduce that racial and caste-based discrimination are by and large deeply entrenched in their culture and systems. The big question then is how to hold the U.S. and India accountable so that racism and caste truly become things of the past.

Since the Black Lives Matter movement began in response to an unrelenting series of police homicides of unarmed black people, both men and women, and the Trump race-baiting campaign that led to his totally unanticipated victory, the question of race has been brought back front and center in U.S. society, culture, politics and the media. This is part of the ebb and flow of American history from the slavery to the present where the issues of racial inequality and oppression surface, submerge, and re-surface again. One can argue that the moment Barack Obama was on the verge of his presidency and then immediately after his victory, a counter-movement began with the formation of an independent Tea Party. The backlash against electing America’s first African-American president was palpable: it would set in motion a convergence of forces, involving Trump himself early on his birth-movement, that would see a renewed alliance of racism, xenophobia, and anti-immigration forces coupled with a blatantly public “white nationalist” movement that delivered Trump to the White House. Many Americans were shocked and continue to be in shock for every day of his presidency that passes. Americans are galvanised to think about racism and constantly and how to combat the forces that continue to perpetuate its effects. In recent years, Hollywood too has brought attention to the history of race, racism and the legacy of slavery to the post-civil rights era with films such as Black Panther, 12 Years of Slave, Selma and Fences.

Many racial minorities would argue the inverse: post-racial colorblindness is just a cover for the continuation of white privilege that fails to come to grips with real social, political, legal, economic, and cultural inequality at all levels of society.

Most sociologists will argue that most Americans do not believe in the essential differences of the races that make one race biologically superior to another like many did in the nineteenth century. That type of racism justified the evil known as slavery. Many would say that race is a sociological construct that when it comes into being can have real effects on the outcomes of life-chances for success for different racial groups, particularly African-Americans, Native Americans, and Latinos/Hispanics.[1] If race is not real, then it can be dismissed and the age of color-blindness and post-racialism is heralded as a triumphant new beginning for American society. But many racial minorities would argue the inverse: post-racial colorblindness is just a cover for the continuation of white privilege that fails to come to grips with real social, political, legal, economic, and cultural inequality at all levels of society. This can span from innocent micro-aggressions to racial slurs to more overt forms of violence in everyday life to institutional racism that keeps certain ethnic and racial groups, particularly African-Americans, in a certain place in organisations and society as a whole. If we admit to racial difference, then conservative arguments against affirmative action for example, say the opinions of Justice Thomas, can advocate that individuals are stigmatised on the basis of their race and forced to speak on behalf of their race. This in turn is an infraction of the freedom of conscience and speech not to be compelled to believe in things one doesn’t, hence disguising conservativism within a more sinister libertarianism in which individual liberty must be guaranteed at all costs to other social groups. Inversely, if we do not admit to the real effects of racialisation and racism in society, then we are blind to the growing monstrosity of racial oppression from overt acts of discrimination all the way to the horror of police homicide of helpless black people. In fact America is committing the grossest of human rights violations, namely the deprivation of the right to life, all in the name of ‘”aw, order, peace and security.”

India may admit to caste, but it will try to convince the world that it does not have a problem with race and racism. One can test that assumption with not only the treatment of non-Indians, such as Asiatic people in the Northeast and people of African descent within India; one can also examine what remains buried within caste and its own internal form of racism.

In another context far from the American context is another phenomenon known as caste, which originated millennia ago in Hinduism, the world religion whose roots lie in South Asia. Caste may or may not be related to race, racialisation and racism say when “fair skin” is commoditised and valued as higher than darker-skinned Indians in the subcontinent. India may admit to caste, but it will try to convince the world that it does not have a problem with race and racism. One can test that assumption with not only the treatment of non-Indians, such as Asiatic people in the Northeast and people of African descent within India; one can also examine what remains buried within caste and its own internal form of racism. The privilege of light skin can permeate everything from who gets elected to who is represented in media and film to compatible matchings in the arranged marriage system. But caste is also a phenomenon that transcends race in many respects given its classical definition within Hinduism: there are four castes, known as varnas, namely Brahmins or the original priests and scribes to Kshatriyas, the warriors and kings, to Vaishyas the merchants and business class, to the Shudras or the working, labour classes, particularly in agriculture. One is born into a caste and the only way out is death, when the soul transmigrates to a new body; what caste you are born into in this endless cycle depends on the karma of previous lives or how many “sins” one has committed. Caste, one can argue, is an internal “racism” of the soul given the rigid hierarchical structure of oppression put in place in society.

Rajesh Sampath, PhD, is Associate Professor of the Philosophy of Justice, Rights, and Social Change. He is Associate Director of the Masters Degree Program in Sustainable International Development at the Heller School for Social Policy and Management at Brandeis University. His teaching and research interests include development ethics, theories of justice and human rights, and comparative studies of social exclusion and change.