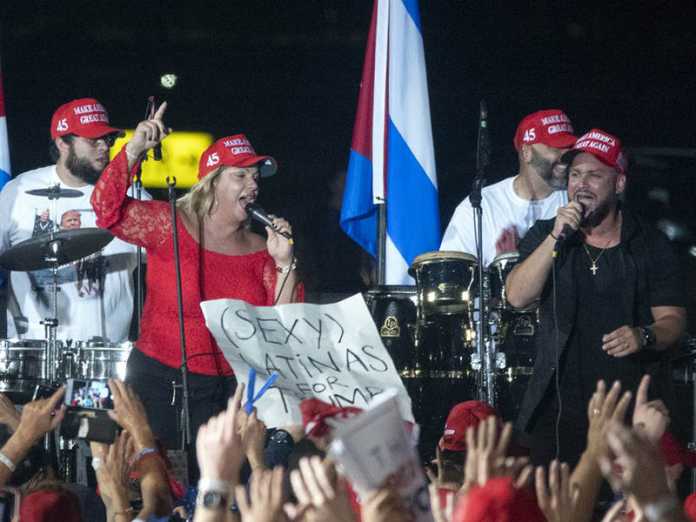 A 74-year-old man dancing half-heartedly and without much rhythm to the Village People’s YMCA while a host of other people complain about the playlist – it might conjure up an image of the tail end of a wedding reception. In fact, it’s yet another facet of the increasingly surreal popular cultural context of the 2020 US election. YMCA has been on Donald Trump’s playlist at rallies for well over a year, and the Village People are on a long list of artists who – as in 2016 – have asked the president’s campaign to stop using their music.

Various levels of denunciation and threats of legal action have come from, among others, Phil Collins, the Rolling Stones, Neil Young and Queen – whose guitarist Brian May has called it an “uphill battle” to get the Trump campaign to stop playing the band’s 1977 hit We Are The Champions.

Given all the other accusations that have been ranged against him – from sexual assault to the illegal use of military aid to pressure a foreign country into investigating his Democrat rival – Trump’s skirting of copyright regulations might seem like a comparatively small matter. And indeed, there are limited provisions for artists to stop the use of their music.

But there’s a strong connection between, and investment in, the relationship between pop culture and electioneering in the US. The use of songs at rallies – as opposed to, for instance, television spots – is generally covered by the licenses for performing rights collection societies ASCAP and BMI, with packages of songs available for use that number into the millions.

Artists can withdraw their material from these packages, and the Stones have done so, as Rihanna did in 2018. Even if the broader license that applies to the venues themselves might still pertain, it’s fraught territory that is being explored in greater depth now than previously due to the obduracy of the Trump campaign.

Other options include recourse to a “right of publicity”, which refers to an artist’s personal brand, like a trademark, and could potentially allow for legal action if this were seen to be degraded by a particular use of their music without permission. While there’s a long history of artists objecting to their music being used by politicians, it has become a torrent around Trump. Normally a “cease-and-desist” letter suffices – and plenty have been sent – but the president, or his campaign team, seem unconcerned with such niceties.

Joe Biden has enjoyed a rather more cooperative relationship with the musical world. Bruce Springsteen has long made a habit of appearing on the stump for Democrat candidates. This time around he has also authorised the use of his song My Hometown for a Biden ad, which the singer also narrates, centred on Scranton, Pennsylvania where the candidate grew up.

Similarly, the Beastie Boys departed from their usual refusal to license their work for adverts by allowing the use of Sabotage in a piece featuring an embattled music venue to highlight the shortcomings of Trump’s response to the COVID-19 pandemic. In an indication of just how tense this election is, though, the ad was pulled after the owner of the venue started receiving threats.

The Biden-Harris campaign also appears to have taken a more strategic and considered approach to its use of music. Trump’s use of music leans heavily on broad-brush patriotism and on the few musical endorsements he’s received – such as country artist Lee Greenwood, whose God Bless America has been a longstanding Trump theme.

Trump’s fondness for mass rallies also militates towards songs with a broadly singalong, feelgood vibe that will resonate with, and keep occupied, the older voters who may wait for hours at venues before his appearances. It’s also hard to avoid the conclusion that there’s an element of trolling his critics with the persistent use of the Stones’ classic, You Can’t Always Get What You Want.

Biden’s musical backdrop, on the other hand, feels more carefully calibrated. A New York Times analysis during the primaries showed that there was an almost even split between black and white artists in his playlists, for instance. His use of Springsteen’s blue-collar aesthetic explicitly echoes the narrative of support for the working and middle classes at the core of his campaign, and his projection of himself as, in the words of Barack Obama, the “scrappy kid from Scranton”.

The greater presence of modern pop in his playlists, in comparison to Trump’s rock classics, speaks to an attempt to reach young voters. Campaign song The Change, by R&B artist JoJo, was only released in October and the advertisement featuring it also deploys a Spanish-language version of the song.

Even his use of older songs, like Stevie Wonder’s Higher Ground, appears designed to specifically resonate with his campaign message. The Staples’ Singers We The People, for example, explicitly echoes the US constitution, the protection of which in the face of Trumpian assaults has been a core plank of Biden’s narrative.

Given the febrile nature of the past four years, many would welcome a change of tune. But it’s unlikely that any defeat would silence Trump. Ultimately, though, only one set of supporters will be singing when the results come in. The polling indicates that this will be Biden’s, although the experience of 2016 means that nothing is to be taken for granted.

Adam Behr I am a Lecturer in Contemporary and Popular Music at the International Centre for Music Studies, Newcastle University. My PhD, from the University of Stirling, involved historical and ethnographic research into the evolution and social dynamics of the rock band as form of creative practice.

Subsequent research also includes work on the live music sector, musicians and copyright, cultural policy and the interactions of music, politics and policy.