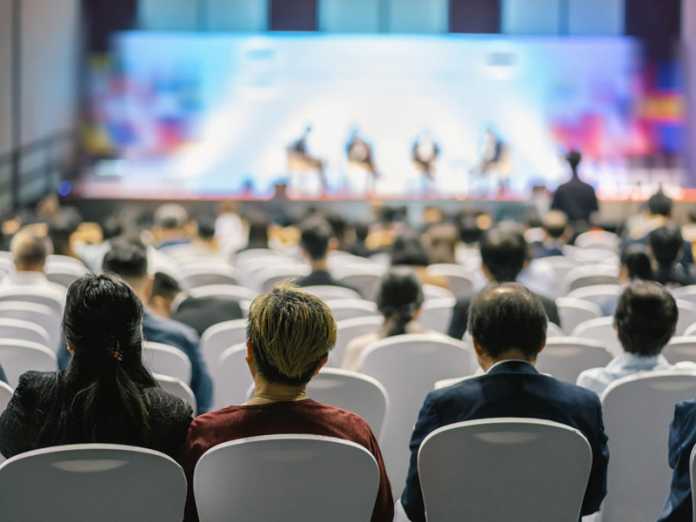 If you’ve ever been in the audience for a conference or symposium, it’s likely you introduced yourself to fellow attendees at a break in the proceedings. Chatting, you may have noted a French accent here, or a Chinese accent there, and you may well conclude that people have come from all over the world for this event.

Almost any conference topic is likely to have international appeal. Yet many American conferences offer sessions in English only, limiting the pool of potential international attendees to those who are proficient in English. Americans are certainly aware, after all, that English is not uncommon as a second language for people in many other countries, and so they may assume it’s not necessary to provide simultaneous interpretation.

Yet Americans may assume English is more prevalent around the world than it really is. Certainly countries like Germany and Singapore are rated at “very high proficiency” by the Education Foundation’s English Proficiency Index. Yet the ratings may be significantly and even surprisingly lower for certain other countries. For example, China’s rating puts them in only the “moderate proficiency” range, and among the countries in the “low proficiency” group are such seemingly cosmopolitan nations as Japan, Brazil, and Turkey. Mexico is actually rated at “very low proficiency.” And while the more educated people who comprise the pool of potential attendees for most conferences will likely be more English-adept than their average countryman or woman, this is by no means assured.

And so if your conference isn’t offering simultaneous interpretation, you’re missing out on some potentially valuable attendees, including those from countries with some of the world’s top universities and business leaders. Of course, if you do decide to embrace the benefits of setting up such a system for your next conference, there are challenges as well – challenges that can be dealt with effectively and efficiently if you just keep some key points in mind:

Those whose ears and vocal cords are the go-betweens for your speaker and your audience must understand the nuances of both languages, including colloquialisms and even slang. A literal translation can often be misleading, to the point of resulting in listeners taking away a very inaccurate message. It certainly helps if the interpreter has some knowledge or expertise in the topic area, or at least some familiarity with the nomenclature.

Those who have all the necessary skills are quite rare.

André Kaminker was the first person to do simultaneous interpretation (at the Nuremberg trials) and he is said to have had a photographic memory. Interpreters must often start providing the first part of a sentence before the speaker has completed the second part. Yet different word orders in different language can make this a real challenge. For example, a German sentence stating that something isn’t true will often not use the word “nicht” (“not”) until the end. An effective translator may well note the speaker’s tone of voice in order to anticipate the “nicht.”

For this and other reasons, simultaneous interpretation is quite stressful, and interpreters need frequent breaks.

Believe it or not, translating numbers – seemingly among the most straightforward tasks an interpreter might be asked to do – can be particularly difficult. While “42,568,” for example, may look simple, translating “forty two thousand five hundred and sixty eight” requires a long string of words. This is just one example of the stress encountered on the job, and so it’s generally felt that two simultaneous interpreters should be used for any one translation, with each alternating after 30 minutes to avoid loss of quality.

You and your interpreters will be better off if they’re working on-site.

Thanks to the internet, today the traditional translation booth is often being replaced by interpreters working at home. It may seem like there are cost savings in using this option, but it will pay to have them in a situation that enables you to monitor their stress levels and help them minimize it with comfortable facilities and high quality equipment. And if the interpreters, too, can interact with attendees at breaks in the presentations, they’ll be more tuned in to their audience – and that can be a critical difference in providing the “right” interpretation.

Only use of the highest quality electronic translation systems can ensure a positive experience for all.

When attendees and interpreters alike are equipped with comfortable, unobtrusive headsets and transceiver/receiver pairs that reliably produce crisp, clear, sound, it makes everyone’s task easier because at least one potential source of stress will be virtually eliminated.

By doing some of the groundwork and providing simultaneous translation, your next conference or symposium can become a truly international event, open and inviting to all regardless of their English language capabilities. And by keeping these premises and guidelines in mind, you can help ensure a successful experience that may well translate into positive word-of-mouth and repeat attendance.

Rick Farrell is President of Plant-Tours.com. Rick is North America’s foremost expert in improving manufacturing group communication, education, training and group hospitality processes. He has over 40 years of group hospitality experience, most recently serving as President of Plant-Tours.com for the last 18 years.  He has provided consulting services with the majority of Fortune 500 industrial corporations improving group communication dynamics of all types in manufacturing environments.

Plant-Tours.com manufactures the most reliable, easy to use, highest quality headset communication systems for the manufacturing, industrial and institution markets.