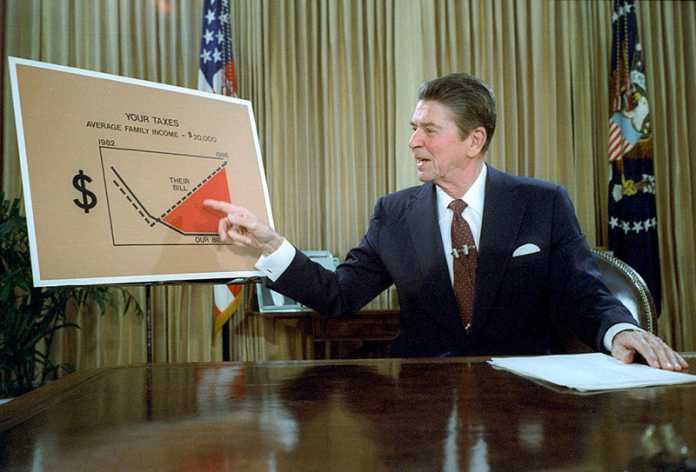 The global pandemic has changed everything, highlighting the failures of economic policy that has dominated the Western world for the last 50 years. Graham Vanbergen writes that change has already arrived and that trickle down economics has effectively been killed off by the new ideals of ‘building back better’.

Trickle-down economics or ‘supply-side economics’, sometimes known as ‘Reagonomics’ and in more critical circles neoliberal capitalism has now seemingly entered the end stage of its lifecycle because it failed when tested. It failed because the pendulum swung too far. The evidence of this failure lies in the two countries that promoted it most of all – the USA and Britain.

Trickle-down economics was an ideological change in economics brought about by President Ronald Raegan and Conservative Prime Minister Margaret Thatcher in the 1980s. They believed taxes on businesses and the wealthy in society should be reduced and then restrained as a means to stimulate business investment in the short term and benefit society at large in the long term. They also believed in the idea of the free market, where prices are regulated by the negotiation of willing buyers and sellers. They actively aimed at smaller government with privatisation at its heart – taking the stance that big government was bad for everything and what was left should be deregulated.

There is a reality for this 50-year experiment in failure, and many in-depth studies have shown this to be the case.

“50 years of data concludes that trickle-down economics does not promote jobs or growth.”

An analysis published in 2012 by the Congressional Research Service found that reductions in top tax rates were not correlated with economic growth but were associated with income inequality (1). More recent studies suggest a link between trickle-down economics and reduced growth, and a 2020 study that analysed 50 years of data concluded that trickle-down economics does not promote jobs or growth and that “policymakers shouldn’t worry that raising taxes on the rich will harm their economies” (2).

Furthermore, an IMF study published in 2015 concluded that there was no evidence that cutting taxes on the wealthiest lifted the incomes of everybody. In fact, it found the reverse was true – “if the income share of the top 20 per cent increases, then GDP growth actually declined over the medium term, suggesting that the benefits do not trickle down.“

To cap all of that, the London School of Economics examined data from 18 OECD economies over the past 50 years and found that tax cuts for the rich tended to increase inequality but had no discernible effect on GDP growth and unemployment (3).

The continued focus on expanding the services sector over the 1980s, 90s and 2000s over manufacturing, especially financial services, led to more deregulation, leading directly to the bank-led financial crisis of 2008. Ten million Americans had their homes repossessed. In Britain, the national debt doubled over the following decade, and every household in the country was made £30,000 worse off for it. With it came austerity, increased deprivation, poverty, homelessness – and ultimately hopelessness. It was, of course, the deindustrialised towns and cities that felt the pain the most.

Now there is consensus by experts that trickle-down economics has had its day. The lived experience of this failure can be seen in the rust belt – a region of the Northeastern and Midwestern United States that saw industrial decline starting in the early 1980s. The same can be said about the industrial regions of the north of England.

And as the global pandemic recedes, the new rhetoric is to build back resilience. In reality, this now means reversing the failed economic ideology that Reagan and Thatcher legislated for and bring supply chains back home.

The election of Donald Trump in America and the Brexit referendum result in the UK was the desperate response of the people in these same places that were most negatively affected – known as the ‘left behind’ (4). And what they voted for was change – because the economic ideology of the day had dramatically failed them. In America, Trump promised the working class big change but doubled down on tax cuts for the rich. It didn’t work.

Both Joe Biden and Boris Johnson’s advisors have understood this. The result is that significant change really is coming to the economic management of the USA and the UK. It will come in the form of expanded government and increased taxes. The colour of the tribe makes little difference – just as it did not over the decades.

“My fellow Americans, trickledown has never worked. It is time to build America from the bottom up and middle out.”

President Biden made a speech to Congress to mark his first 100 days in office. He focused on the fact that since the start of the global pandemic, some 20 million Americans had lost their jobs, highlighting at the same time that nearly 650 American billionaires had increased their combined net worth by $4 trillion. His response to this is $6 billion of government spending on welfare and infrastructure. However, the financing of this expenditure is through higher taxes on companies and the wealthiest individuals. “My fellow Americans, trickledown has never worked. It is time to build America from the bottom up and middle out,” – Biden declared. Those words truly are telling.

Two weeks after Biden’s speech, Boris Johnson declared (the same day of gains made in local elections) – “These election results are an instruction to us to keep our focus on what matters – more jobs and investment, better public services and the (northern) levelling up opportunity. There will be no let-up in levelling up.”  In effect, Johnson is taking up the traditional ground of the left.

The Times newspaper reported in the same week that – “The (British) government will pledge today to put “rocket fuel” under its levelling-up agenda with a Queen’s Speech aimed at the “forgotten” 50 per cent who didn’t go to university.” Vast amounts of taxpayers money will be aimed at reversing the failed ideology of the last 50 years of neoliberal economic policy.

Biden is reversing out of the economic system as it stands. He is gambling that by increasing taxes on the wealthiest (defined as those earning more than $400,000 a year) and raising the current corporate tax rate from 21 per cent to 28 per cent, to the benefit of lower-income households, it will drive faster growth and therefore living standards. He is also focusing government spending on desperately-needed infrastructure.

In Britain, the chancellor, Rishi Sunak, has made a similar gamble with his decision to raise corporation tax by six per cent to 25 per cent in two years. Boris Johnson’s ‘levelling up’ agenda in one thing – saving the Union of the United Kingdom by spending billions on infrastructure in Scotland is another.

I keep repeating the words’ gamble’ because that is precisely what we are talking about. The last fifty years has demonstrated that economists and policymakers got it wrong. This huge change confirms it. Who knows if this latest plan will work.

However, capital seeks holes in the system to make profits – it’s what it does best. Innovation and entrepreneurialism go hand in hand. In a world of globalised opportunity, both Biden and Johnson should be wary of taxing capital. More importantly – they should enforce that due tax is paid in the first place. For instance, Amazon generated €44billion (£38bn) of revenue in Europe last year – and paid not a single cent in corporation tax (5). In Britain, 1 in 5 of the biggest corporations paid no corporation taxes. Tax dodging, also known as the tax gap, is between £40 billion (HMRC estimates) and £100 billion (independent tax experts (6).

In the USA, the tax gap recognised by the IRS is now nearly $500 billion a year. If Britain is anything to go by, that figure is likely to be much higher.

In saying all that, this is a significant change of economic policy – taxing wealth that generally sits idle and aiming its windfalls at the other end of the wealth spectrum, where it becomes more productive – is bigger than most people give credit for.

The administrations of both Biden and Johnson seem to be aware of the risks. This is because the risks of neoliberal policies – effectively a race to the bottom, the most significant threat to our national welfare and prospects, have to be replaced. Of course, this change of direction – and a new set of promises has got them both into power.

Whether this new gamble pays off is another question. National debt will inevitably continue to increase. The threat of inflation may well cause questions over interest rates in the medium to long term, and capital may seek new hunting grounds. But what all this demonstrates more than anything is that the ‘build-back-better’ agenda in the post-pandemic world also means the rules have changed, especially for economic policy. The era of trickle-down economics or neoliberal capitalism has quietly come to an end.