Last weekend, Maria Ressa, CEO of Rappler, got a Nobel Peace prize for her “courageous fight for freedom of expression.” In reality, the award is risking Nobel’s credibility.

At the time when Julian Assange, the founder of Wikileaks, is struggling for his life, has been tortured and may well face an extradition to the United States, the Nobel Committee chose to ignore his struggle for press freedom. Instead, the prize was co-awarded to Maria Ressa, CEO of Rappler.

In Manila, the Nobel prize has sparked mixed reactions. Ressa is seen as a divisive, controversial figure. While she has a dual citizenship and upscale properties in the US and the Philippines, Rappler, as a news media, is no cash cow, relies on questionable external funding and remains in a legal quagmire. Though framed as a champion of press freedom in the West, Rappler is one of the least trusted Philippine media, barely ahead marginal cable news and lifestyle networks (Figure 1).

“Maria Ressa does not deserve the Nobel,” says Francisco Sionil José, one of the best-known Philippine authors. The issue is not press freedom, censorship or democracy, he points out asking: “Who is funding her?”

That question inspired this commentary. Let’s follow the money.

Ressa was nominated by Jonas Gahr Støre, the incumbent Norwegian Prime Minister, for the work “she has done in an authoritarian regime, where even the president has told her that she can be killed, and he could even do it himself.”

The odd claims stunned many in the Philippines.

Internationally, Støre is portrayed as a millionaire, whose wealth stems from his rich shipbroker father, and a “business-friendly” labor politician, who began his career as a conservative. After Støre joined the labor in the mid-‘90s, he oversaw the broadest privatization in Norway’s history. Also, he has served in Harvard, is an ex-naval officer and his mentor is Jens Stoltenberg, current chief of the NATO.

When Hillary Clinton called him for funds, Støre pumped millions of Norwegian tax monies to the controversial Clinton Foundation, haunted by corruption allegations. Reportedly, the same goes for tax monies to the Open Society Foundations (George Soros) and the Bill & Melinda Gates Foundation. Some Norwegians express concern about the role of the billionaire foundations in their foreign policy (Figure 2).

Støre is now board member in the International Crisis Group (ICG), created with Soros’s seed funding. Criticized for championing NATO’s wars, the ICG is co-chaired by Mark Malloch-Brown, ex-UN deputy secretary-general, ex-head of Soros funds, and president of his Open Society Foundations.

Malloch-Brown has had close ties with the Philippine Aquino political dynasty since 1986, when his PR firm delivered Corazon Aquino’s election triumph. And he plays role behind Smartmatic, the election technology used in many countries with consequent charges of graft, fraud, and unethical conduct, including the Philippines.

When Støre announced his support for Ressa in January, he also nominated the Paris-based Reporters Without Borders (RSF), founded by its longtime head Robert Ménard (1985-2012); a notorious Islamophobic and white supremacist, and current mayor of Béziers. Under Ménard, RSF’s campaigns coincided those by U.S. neoconservatives, CIA and the National Endowment for Democracy (NED), which have funded RSF activities – as well as Ressa’s Rappler.

Currently, the RSF is led by Christophe Deloire, who is more cautious in rhetoric but shares Ménard’s geopolitics, touts the RSF’s Information and Democracy Forum and is hungry for the Nobel Peace prize.

In May, I argued that the RSF has targeted Asia. Just two months later, the RSF included president Duterte among its global “press freedom predators” noting that the Philippines has consistently slipped in the World Press Freedom Index (WPFI). That Index has been widely criticized for biased method. It is said to reflect the agendas of RSF funders, including French Defense Ministry, the US NED, and indirectly those of sponsors, such as George Soros and Pierre Omidyar, Rapper’s white knight.

Interestingly, the RSF gallery of predators target almost exclusively poor developing countries – but ones that are seen as resource-rich and pivotal in geopolitics.

At the Summit for Democracy, Secretary of State Antony Blinken said the Biden administration has asked Congress for $236 million to support “independent media” around the globe. Blinken promoted the new International Fund for Public Interest Media (IFPIM). Together with New York Times CEO Mark Thompson, still another controversial figure, Ressa will be spearheading IFPIM’s global push as its co-chair.

When State Department funds “independent” non-governmental organizations, it turns them effectively into governmental NGOs, susceptible to self-censorship to keep the money flowing, as critics have already argued.

The IFPIM founders feature MacArthur Foundation with insurance endowment money, and Craig Newmark Philanthropies relying on money from the notorious classifieds website Craigslist. In turn, BBC Media Action originates from BBC World Service, which was set up in ex-Soviet Union and Eastern Europe in the 1990s, after the West’s liberal reforms caused a multi-year Great Depression in Russia.

However, the key funders include a “global philanthropic organization” called Luminate and the NED. The National Endowment for Democracy was spun off from the CIA in the 1980s to blur the intimate links with government agencies that promote regime change around the world. Luminate is the re-branded Governance & Citizen Engagement initiative of the Omidyar Group, with $314 million in funding.

Ressa serves as the public face for both the NED and Omidyar initiatives (Figure 3). 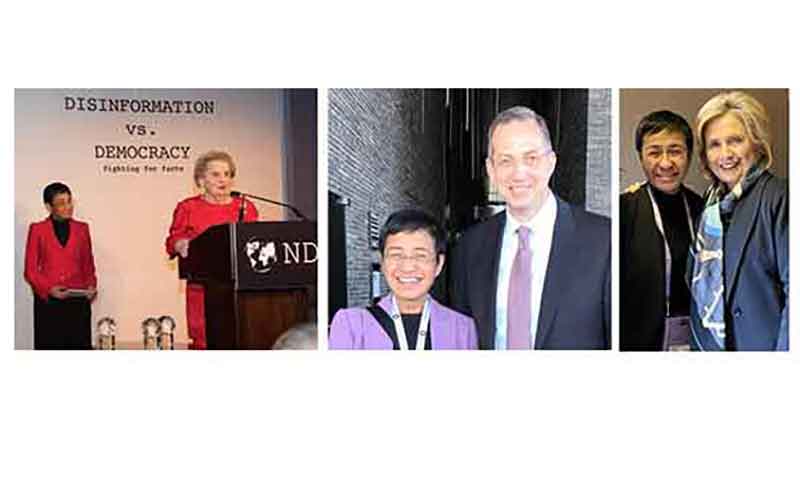 Ressa with Ambassador Madeleine Albright, the former chair of NDI, the Democratic arm of NED, with Derek Mitchell, its current chair, and Hillary Clinton

Rappler’s billionaire funder is Pierre Omidyar, eBay’s founder with net worth at $22 billion. The official version about his’s riches is that he created eBay for his fiancée as an online marketplace, as Time once reported.

According to Yasha Levine’s Surveillance Valley (2018), eBay grew after it created an internal police and intelligence agency of former FBI agents in 1999 to spy on eBay users and track down fraud. They “worked closely with intelligence and law enforcement agencies in every country where it operated.” eBay handed over user data to the NSA and FBI, without requiring subpoenas or court orders.

Today eBay’s annual revenue is close to $11 billion. With his deep pockets, Omidyar has had the ear of the Obama and Biden administrations but also neoconservative William Kristol’s pet projects Defending Democracy Together and Alliance for Securing Democracy. Prior to Omidyar, Rappler had another investor (North Base Media), which has been associated with Soros funding and destabilization.

A careful scrutiny of the facts suggests that the real problem with Rappler is advocacy journalism, tax evasion and a cyber libel.

What makes her case particularly distressing is the agendas of powerful special interests, starting with her misguided nomination and a set of links with the NATO, economic neoliberalism, and NGOs haunted by corruption allegations.

The challenges are compounded by actors that have been linked with white supremacy and far-right extremism, and efforts to undermine true press freedom in the interest of regime change, often in poor but resource-rich or pivotal countries.

When press freedom means freedom to exploit the press and when democracy translates to the power of the few at the expense of the many, even the noblest award institutions risk losing their very meaning and purpose.

Dr. Dan Steinbock is an internationally recognized strategist of the multipolar world and the founder of Difference Group. He has served at India, China and America Institute (US), Shanghai Institutes for International Studies (China) and the EU Center (Singapore). For more, see https://www.differencegroup.net/