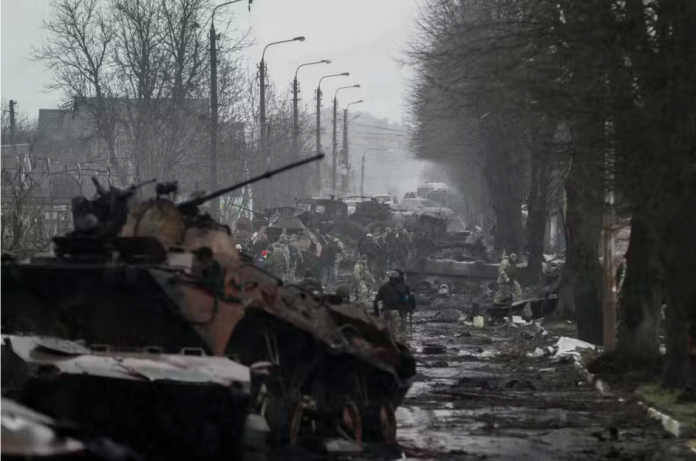 When Ukraine learned on April 2 that the whole Kyiv region had been liberated from Russian troops, there was barely any jubilation. This was mostly because of the gruesome evidence of war crimes left by the Russian occupying force in what were once affluent suburbs of Kyiv. The horrors discovered in Bucha, Irpin and Hostomel after a month-long invasion have the potential to shift the perception of the war – not only domestically, but also among the international community.

As a researcher of European security focused on eastern Europe and the role of the EU, I’ve identified three important ideas that are beginning to take shape in the wake of these revelations. The first is that this is Russia’s war. Vladimir Putin’s obsession over Ukraine, which has been well documented in the media over the past 20 years, and his angry tirade on the eve of the invasion made it easy to put all the blame solely on him. The label “Putin’s war” has been used both by the world press and in Ukraine itself.

But the evidence of the atrocities left by the fleeing Russian soldiers, makes this idea no longer tenable. After being pushed back from the Kyiv region, Russian soldiers are reported to have left mass graves and corpses of civilians with their hands tied behind their backs and bullets in their heads. There are also reports of naked female bodies that had been raped and partly burned, and mutilated bodies of children.

It also appears Putin still has strong support among ordinary Russians most of whom are reliant on state-controlled media for their news of the war. Anecdotal accounts relay how many Russians refuse to believe even their family and friends in Ukraine that Russia is waging a full-scale war in Ukraine. And Putin’s domestic approval rating recently reached 83%.

At the end of March, exiled Russian businessman Mikhail Khodorkovsky wrote that Russian society is at risk of becoming an accomplice to “the Kremlin’s fascist ideas and crimes”. Bucha suggests that the Russian army has already crossed that threshold.

The second idea is that for Ukraine this is a war for survival. The Bucha massacre and tactics used by the Russian army all over Ukraine demonstrate that Russia appears set on the destruction of the country and its people.

Russia has bombed residential neighbourhoods with no military infrastructure and reportedly resorted to the use of illegal cluster munitions in the Donbas. It has also targeted critical infrastructure – dropping bombs on farms, oil refineries and food storage facilities, disrupting the sowing season to create unlivable conditions and bring famine to Ukraine, once known as “the breadbasket of the world”.

With this in mind, the third important realisation that is gaining more support – especially after Bucha – is that the outcome of this war will be determined on the battlefield. While it is necessary to continue negotiations, at least to ensure the safe passage of humanitarian aid and green corridors for evacuations, freezing the conflict at this stage would not solve anything and only give Russia more time to regroup.

What to do next

A recent open letter by 96 experts on eastern Europe called for the EU to adopt a far more robust approach towards Russia. The bloc’s previous policies, the letter said, had failed because they had been based on the false hope that Russia’s neo-imperial ambitions could be contained through diplomacy and trade. But its military activities in Moldova since 1992, Georgia since 2008 and Ukraine since 2014 had already shown the limits of such an approach.

As the previous approach to Russia has failed, it is therefore paramount for the EU and other friends of Ukraine to try new approaches and be prepared to change them when it becomes clear that they are not working or are not working fast enough. Thus, the previous sanction packages, implemented by the EU and other western actors, worked in an incremental way: they needed time to take effect, the time that Ukraine and its population does not have.

Faster and more powerful steps can be taken as an alternative approach. In practice, this could mean not only increased sanctions against Russia, but also greater economic and military support for Ukraine. The main purpose of tougher sanctions – including a complete oil, gas and coal embargo – is the disruption of Russia’s war machine, but it could also lead to the weakening of Putin’s position at home.

Of course, it is impossible to guarantee that the latter will happen – and many EU countries are averse to the idea of a stricter sanctions regime which would impose heavy economic costs for their own populations. But given the cost Ukraine is paying for a war it neither started nor wanted – with many lives being lost every day – it will become more difficult for the west to continue resisting tougher measures.

It’s also time to recognise that global security remains under threat as long as Putin remains in the Kremlin. Former UN prosecutor Carla Del Ponte has called to issue him an arrest warrant. The US president, Joe Biden, has called Putin a war criminal who must face justice.

There is arguably only one route by which this outcome can be achieved and that is if Ukraine wins a military victory. For that reason, the west, which is not ready to get directly involved in the war, should consider supporting Ukraine with faster and better weapon supplies, including fighter aircraft and medium-range and long-range anti-aircraft missile systems.

It is time for Ukraine’s friends to act with Ukraine instead of simply “standing with Ukrainians”. As the experts’ letter said: “All possible measures short of direct military confrontation with Russia must be taken to punish, contain, and eventually end Russia’s aggression against Ukraine.” This is imperative if the west doesn’t want a stain of another preventable genocide on its conscience.

This article was originally published in The Conversation on 7 April 2022. It can be accessed here: https://theconversation.com/ukraine-war-evidence-of-atrocities-in-kyivs-suburbs-strengthens-case-for-a-harder-line-against-russia-180614

Dr Anastasiia Kudlenko holds a PhD in Politics and IR from Canterbury Christ Church University and International Masters in Russian and Central Eastern European Studies from the University of Glasgow, united Kingdom. She specialises in security of Wider Europe, security sector reform and peacebuilding. Geographically, her work covers Central and Eastern Europe (including EU and non-EU states), the Western Balkans and Ukraine. She is also a Post-Doctoral Research Associate at the University of Kent, working on the GCRF COMPASS Project.