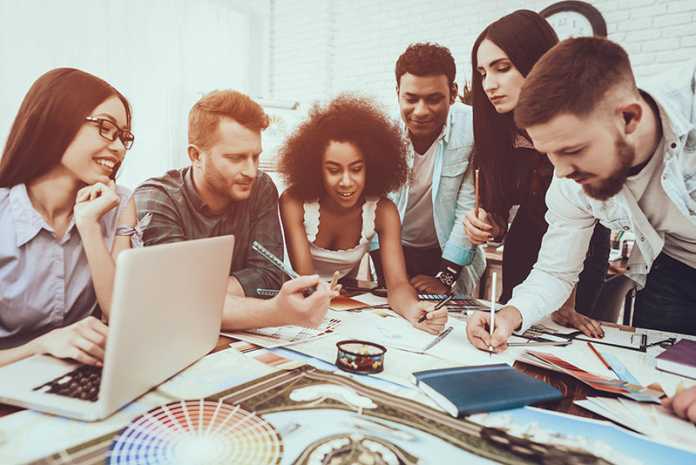 Diversity and inclusion in the workplace is a sensitive topic. People are afraid to get things wrong or to use the wrong word. It doesn’t help that the words involved are confusing.

You have probably encountered these concepts at a mandatory training session, a workplace event, or on Twitter. They often involve decades of complex scholarship being reduced down to a single word, and, as such, they can easily be misrepresented.

But for any progress to be made, and for real diversity and inclusion to be achieved, getting to grips with what they actually mean is crucial. Here then are six of the most embattled concepts.

Once limited to LGBTQ discussions (as in “straight ally”), this term became popular in 2020 following the murder of George Floyd. As its 2021 Word of the Year, dictionary.com defines allyship as:

“The status or role of a person who advocates and actively works for the inclusion of a marginalised or politicised group in all areas of society, not as a member of that group but in solidarity with its struggle and point of view and under its leadership.”

Allyship, then, isn’t about waving the correct flag during the correct month, or getting drunk at Pride with colleagues (well, not just that). It’s an action word that requires action; like education (of self and others), effective activism, consistent advocacy and using your platform or privilege (see below) to amplify the voices of marginalised others.

If, for example, your workplace did the white-text-on-a-black-square thing on social media in June 2020, and nothing else, they were probably engaging in performative allyship. This kind of superficial show of solidarity chiefly benefits those performing it, as opposed to the group suffering the discrimination.

Within UK society, working-class people face inequalities related to, for example, access to sought-after unpaid internships, entering higher managerial and professional jobs and their average salary once in those jobs.

Yet the concept is easily understood – we have all seen snobbery in action (see John Cleese’s classic 1966 sketch with the Two Ronnies). However, the misunderstanding here concerns not the definition of the concept, but the legality of the discrimination.

Social class is not protected in the Equality Act 2010, the piece of UK legislation that outlaws discrimination in the workplace. This often surprises people, presumably because it feels like something that should be covered by legislation – and indeed it is, in over half of all European countries. Just not in the UK.

This term is often vilified, but its meaning is actually straightforward. Every person has multiple intersecting identities (age, class, gender, sexuality, race and so on) which can lead to specific outcomes, particularly in relation to discrimination or privilege.

White women, Black men and Black women may face some common issues in the workplace – a pay gap, for example. But research shows that the latter group often face challenges specific to how their identities as both women and Black people intersect.

The term misogynoir was coined to designate the specific type of discrimination that Black women face. This can manifest as medical misdiagnoses; racial differences in pain management after giving birth; pervasive, harmful stereotypes such as that of the “angry Black woman”; and gendered racist abuse of the kind directed at former Labour Shadow Home Secretary Diane Abbott during the 2017 election.

Not to be confused with equal pay. “Equal pay” means paying a man and woman equally if they are doing the same work: this is a legal requirement. The gender pay gap, meanwhile, is the difference in average hourly earnings between all men and women in a specific company, sector or country.

Research shows that it can be caused by both old-fashioned discrimination and also differences in what economists call human capital: the economic value of an employee’s education, training, experience, skills, health and other traits. Women’s experience and career choices are often affected by gendered expectations regarding child-rearing and the wider division of labour in the family. There are other pay gaps too, relating, among other characteristics, to race, to sexual orientation and to disability.

Often (and mistakenly) used interchangeably with “privileged”. To wit, the Conservative MP Jonathan Gullis, made headlines in October 2021, when he defied any “left woke warrior to visit Stoke-on-Trent North, Kidsgrove and Talke and try tell the people there that they are somehow ‘privileged’”.

As activist Janaya Khan has put it, privilege doesn’t refer to what you have gone through, but what you haven’t had to go through. It designates the advantages, and/or lack of disadvantages, that any one person might have because of who they are.

US activist Janaya Khan on what activism – and privilege – really means.

“White privilege”, therefore, does not mean that white people are always privileged. It does mean, however, that a white person living in Kidsgrove will not have to consider whether they will face discrimination – whether out shopping, going to school or playing football – simply because of their skin colour. That is a specific disadvantage they don’t have to even think about. And it is the not having to think about that is the privilege.

Gender identity and gender presentation are not always aligned. Sometimes one’s gender identity evolves over time. The move to be explicit about which pronouns we want people to use when referring to us in the third person – as the American singer Demi Lovato did in 2021, when they came out as non-binary – can be a way to signal one’s gender identity.

A recent viral video showed a man, when asked what pronouns they use, rejecting the whole idea by replying, “I don’t do pronouns”. Sharing your pronouns if you are cisgender (that is, not trans) is easy, however, and signals solidarity with trans and non-binary people.

It is also helpful because we can’t always assume we know what someone’s gender identity is. Misgendering (calling someone by the incorrect pronoun) can contribute towards the stress a trans person experiences as a minority. Recent tribunal decisions have mentioned that regular, deliberate misgendering could be considered discrimination. If you make a genuine mistake, though, apologising and correcting yourself “need be no more complicated than correcting yourself after getting someone’s name wrong”.

This article was originally published in The Conversation on 3 May 2022. It can be accessed here: https://supchina.com/2021/11/23/chinese-tech-philanthropy-in-the-age-of-common-prosperity/