In our 20s and 30s, there can be immense pressure to measure up to the expectations of society, our families, our friends and even those we have for ourselves. Many people look back and feel disappointed that they hadn’t taken the opportunity to travel more. Others might have envisioned that they would be further along in their careers or personal relationships. In reality, life is hard and we might face setbacks (big and small) that can shatter our dreams, leaving us with fragments we perceive as worthless.

Feelings of failure can take a long-lasting mental toll but they don’t have to stop you in your tracks. There are many teachings, practices and philosophies that can help you deal with disappointment, embrace imperfection and remain optimistic.

One such practice is the Japanese art form of kintsugi, which means joining with gold. It has attracted a great deal of attention in recent years as both an art technique, a worldview and metaphor for how we can live life.

Many forms of Japanese art have been influenced by Zen and Mahayana philosophies, which champion the concepts of acceptance and contemplation of imperfection, as well as the constant flux and impermanence of all things.

Kintsugi is the Japanese art of repairing broken pottery. If a bowl is broken, rather than discarding the pieces, the fragments are put back together with a glue-like tree sap and the cracks are adorned with gold. There are no attempts to hide the damage, instead, it is highlighted. The practice has come to represent the idea that beauty can be found in imperfection. The breakage is an opportunity and applying this kind of thinking to instances of failure in our own lives can be helpful.

A technique to repair broken pots

Kintsugi was fairly widespread in Japan around the late 16th and early 17th centuries. The origins of this aesthetic go back hundreds of years to the Muromachi period (approximately 1336 to 1573). The third ruling Shogun (leader) of that era, Ashikaga Yoshimitsu (1358-1408), is said to have broken his favourite tea bowl. The bowl was unique and could not be replaced.

So, instead of throwing it away, he sent it to China for a replacement or repair. The bowl returned repaired with its pieces held in place by metal staples. Staple repair was a common technique in China as well as in parts of Europe at the time for particularly valuable pieces. However, the Shogun considered it to be neither functional nor beautiful.

Instead, the Shogun had his own artisans resolve the situation by finding a method to make something beautiful from the broken, damaged object, but without disguising the damage. And so, kintsugi came to be.

Finding the beauty in imperfection

Kintsugi makes something new from a broken pot, which is transformed to possess a different sort of beauty. The imperfection, the golden cracks, are what make the new object unique. They are there every time you look at it and they welcome contemplation of the object’s past and of the moment of “failure” that it and its owner has overcome.

The art of kintsugi is inextricably linked to the Japanese philosophy of wabi-sabi: a worldview centred on the acceptance of transience, imperfection and the beauty found in simplicity. Wabi-sabi is also an appreciation of both natural objects and the forces of nature that remind us that nothing stays the same forever. 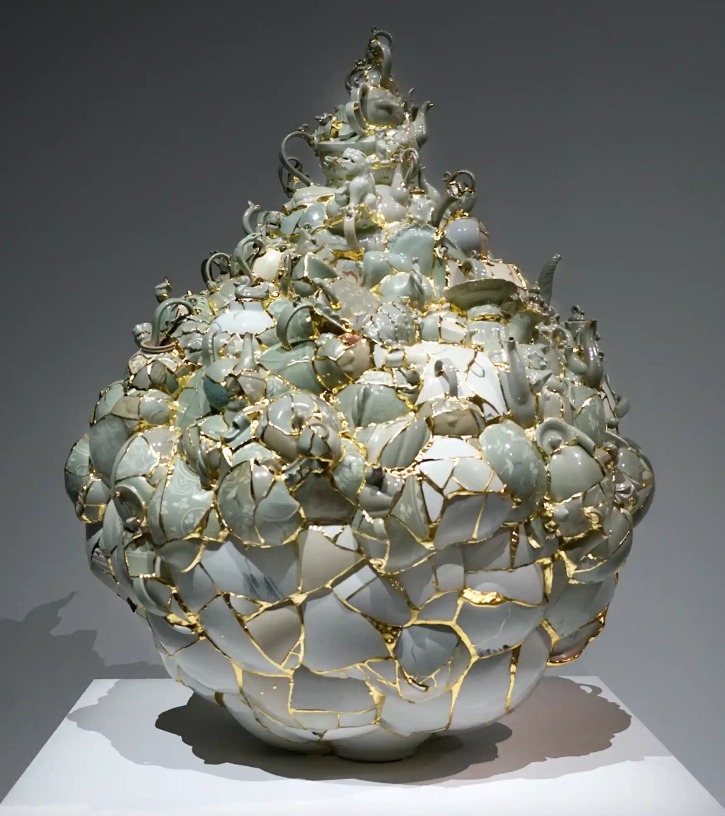 Wabi-sabi can also be incorporated into contemplating something and seeing it grow more beautiful as time passes. As a craft and an art form, kintsugi challenges expectations. This is because the technique goes further than repairing an object but actually transforms and intentionally changes its appearance.

In an age of mass production and conformity, learning to accept and celebrate imperfect things, as kintsugi demonstrates, can be powerful. Whether it’s reeling from a breakup or being turned down for a promotion, the fragments of our disappointment can be transformed into something new.

That new thing might not be perfect or be how you had envisioned it would be, but it is beautiful. Rather than try to disguise the flaws, the kintsugi technique highlights and draws attention to them. The philosophy of kintsugi, as an approach to life, can help encourage us when we face failure. We can try to pick up the pieces, and if we manage to do that we can put them back together. The result might not seem beautiful straight away but as wabi-sabi teaches, as time passes, we may be able to appreciate the beauty of those imperfections.

The bowl may seem broken, the pieces scattered, but this is an opportunity to put it back together with seams of gold. It will be something new, unique and strong.

This article was originally published in The Conversation on 8 November 2022. It can be accessed here: https://theconversation.com/how-the-philosophy-behind-the-japanese-art-form-of-kintsugi-can-help-us-navigate-failure-193487

Ella Tennant – leads Intercultural Communication and language modules and also plays a role in development and teaching for the Liberal Arts degree programme.

Ella’s interest in languages, culture, communication, performance and digital literacy comes from her extensive international experience which includes living, working and conducting research in France, Hong Kong, Japan, Mexico and Spain. In addition to her roles in Higher Education, Ella has worked in business and management, with her own companies in Hong Kong and Spain, and as a writer and translator.