Women’s rights have been front and centre in recent weeks, given the current political climate. But movement toward change has been brewing for some time. And while there’s still a ways to go to reach parity, there are some notable signs of progress in some unexpected places – namely, the global oil and gas industry. 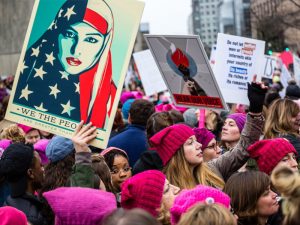 On Jan. 21 of this year, women grabbed the world’s attention in a very big way.

They filled the streets of cities around the world – everywhere from Washington, DC, to Antarctica – in what began as a way to protest the incoming American president.

It became a protest of some of the most vexing issues plaguing women today. And there are quite a few:

The media has hailed it the start of a movement, the beginning of the resistance. But those of us who have been on the inside know the momentum has been brewing for some time. What gained a national stage on Jan. 21 has been slowly working its way through major industries, political parties and institutions – a war for equality waged methodically, deliberately and persistently.

The good news: It’s working. While universal gender equality still eludes us, there is notable progress to celebrate – and I’m happy to report it’s happening in an industry close to my heart: the traditionally male-dominated world of oil and gas.

I am intimately familiar with the struggles of women working in a male-dominated industry. For most of my career, I have been one.

I believe women are the future of the industry and they play a very important role in shaping our industry story.

As a rising executive in the oil and gas industry, I worked in a variety of roles for a variety of companies, including industry giants Shell and BP. That experience inspired me to create Pink Petro, a global social media and learning platform for female professionals in the energy industry, because I believe women are the future of the industry and they play a very important role in shaping our industry story.

I also believe the industry has a lot of work to do to when it comes to giving women equal opportunities. According to the World Economic Forum, “the oil and gas industry, despite making progress in the recent past, continues to miss out on the full benefits of a diverse workforce.”

Women comprise less than 20% of the oil and gas industry’s global workforce. And the industry boasts the largest controlled pay gap, with women making roughly 7% less than men for the same job, according to a recent study from Payscale.1

Even more upsetting: Another study cited by The New York Times2 found that when women enter historically male-dominated fields, pay declines. As Paula England, a sociology professor at New York University, put it: “[Once a woman starts doing a job], it just doesn’t look like it’s as important to the bottom line or requires as much skill…Gender bias sneaks into those decisions.”

So companies and organisations around the world have to be proactive in the fight against bias to reap the benefits of a diverse workforce – of which there are many.

An article in the Harvard Business Review3 outlines research that quantifies those benefits in hard numbers: At companies where the leadership team is equipped with both inherent diversity (traits you are born with, such as gender, ethnicity and sexual orientation) and acquired diversity (traits you gain from experience), employees are 45% more likely to report that their firm’s market share grew over the previous year, and 70% more likely to report that the firm captured a new market.

In an increasingly global and competitive world, an advantage like that cannot be overstated.

That’s why, last year, the World Economic Forum issued a call to action to the global oil and gas industry,4 which was signed off on and endorsed by 22 CEOs. The initiative takes a broader look at efforts that have begun piecemeal at various companies around the world to not only attract, develop and retain women, but also “to remove barriers that may currently hinder or discourage women from rising through the ranks into leadership roles”, according to the official call to action.

What are some of those barriers?

According to an NES Global Talent survey5 examining the gender talent gap, 75% of women say they feel welcome working in the oil and gas industry. But 45% say they do not feel they get the same recognition as their male colleagues.

Katie Mehnert is the Chief Everything Officer of Pink Petro™, the global community and career resource aimed at disrupting the energy gender gap. Pink Petro has members in 31+ countries and over 500 companies. Katie has 19 years of delivering change, learning, and culture transformations. She has held global leadership roles with BP and Shell in health and safety during periods of financial crisis, spills, divestment, and globalisation. A 40 under 40 honoree, she is a graduate of Louisiana State University in Communications, Rice University’s Executive Energy program and The Center for Houston’s Future.