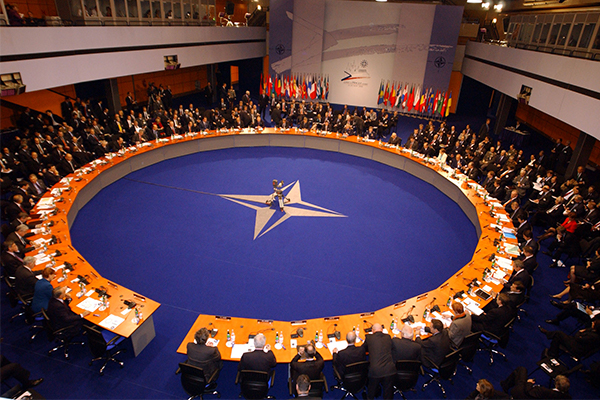 On 4th of April 2019 NATO (North Atlantic Treaty Organization) “celebrated” the 70th Anniversary of its murderous existence. This horror organization was born sort of as a “Rosemary’s Baby”, signed into life in Washington DC, as the North Atlantic Treaty. Its creation was absolutely unethical but also absolutely “legal” – meaning what we, the west, have made the law, a man-made law for war, was applied by the Washington-Pentagon driven NATO. Estimates have it, that NATO and its ‘allies’, cronies, proxies and mercenaries killed more than 20 million people since NATO’s existence, basically since the end of WWII. Compare this with about 70 to 80 million killed in WWII. – The 70 years of NATO are considered “Peace Time” – were they really a period of Peace?

This is a call on all NATO members to exit NATO – to opt for Peace and to exit NATO! To stop fighting wars – to liberate yourselves from the shackles of NATO.

Was the artificially and under totally false pretences, as we know today, Cold War, which started immediately after WWII and lasted until the collapse of the Soviet Union in 1991 – a period of Peace? – Or was it rather a period of constant intimidation for war, a period of armament of the west, a period of maximizing profits for the mainly US military-industrial complex – a period, to destroy any chance the Soviet Union may have had to economically advance, as the arms race made it impossible for the USSR, the country that won WII, to concentrate on economic development at home after having lost 25 million lives and her basic production infrastructure.