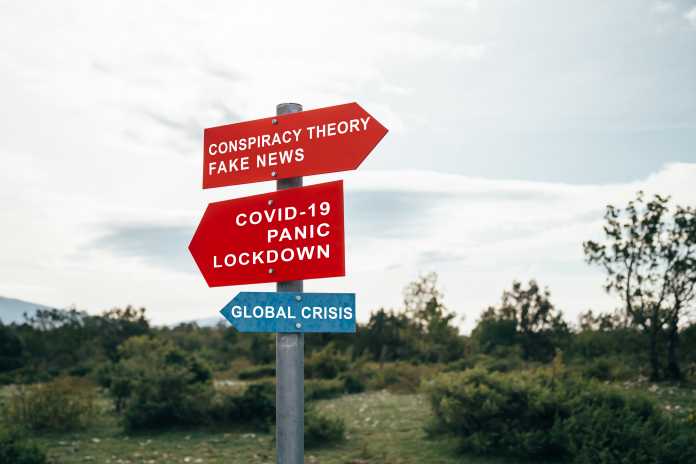 Since the onset of the coronavirus crisis, conspiracy theories have been spreading almost as fast as the virus itself, especially on social media. In order to find out more about the dissemination and acceptance of such conspiracy theories, opinion researchers at Germany’s Allensbach Institute surveyed 1,000 representative citizens in each of the United States, Great Britain, France and Germany in June. Almost a third of British respondents (30 per cent) say flat out that most conspiracy theorists are “crackpots”. Among older Britons (over the age of 60), as many as 37 per cent describe most conspiracy theorists as “crackpots”, a view shared by only 22 per cent of those under the age of 30.

Nevertheless, as many as 22 per cent of the surveyed Britons believe that when it comes to so-called conspiracy theories, “there is more to them than the official accounts of the events”. And one in five Britons think that the mainstream media “are not telling the truth about corona” and therefore prefers to obtain information from independent sources. Among those respondents under the age of 30, this figure is even higher at 29 per cent.

One in four British respondents over the age of 60 agrees that “politicians do not decide anything at all – they are marionettes controlled by powerful forces in the background”. This is a typical topos of conspiracy theorists. Agreement among Britons under the age of 30 is lower, at 15 per cent.

As many as 13 per cent of younger Britons – but only 6 per cent of those over the age of 60 – say they have also heard of supposed plans to implant microchips in all people so they are easier to control. In truth, no such plans exist, although conspiracy theorists have taken a statement by Bill Gates out of context and claim that this is precisely what he is planning to do.

Conspiracy theorists claim that Bill Gates, one of the richest men in the world, is the real culprit behind the coronavirus crisis and that he is using the crisis to set up a “new world order”. But only 4 per cent of surveyed Britons believe this to be the case. Ten times as many, namely 40 per cent, agree with the statement that “With his foundation, Bill Gates has done a lot of good in the fight against hunger and poverty”. Of British respondents who have completed a higher education, 49 per cent express their agreement with this statement, compared with 29 per cent of those with a more basic education.

Capitalism and the super-rich

Anti-capitalists claim that the coronavirus crisis shows that capitalism doesn’t work and that without capitalism, the Covid-19 pandemic could never have had such a major impact around the world. Nevertheless, this is an opinion shared by only 11 per cent of British respondents. However, the proportion of younger Britons under the age of 30 who agree with this thesis, is twice as high at 14 per cent as among those over the age of 60 (7 per cent).

One third of British respondents believe that the true rulers of the world are the super-rich. And just as many support the thesis that “Those who are very rich and want more and more power are to blame for many of the major problems in the world, such as financial or humanitarian issues”.

But the picture is mixed: 53 per cent of older Britons over the age of 60 say that the financial crisis of 2008/2009 was “caused by greedy bankers”, while only half as many (25 per cent) Britons under the age of 30 share this belief.

The survey was commissioned by Rainer Zitelmann, author of the recently published book The Rich in Public Opinion, which for the first time examines popular attitudes towards the rich and is also based on surveys in these same four countries. One of this study’s key findings is that social envy of rich people is most pronounced in France, followed by Germany. The “Social Envy Coefficient”, which indicates the ratio of social envy to non-envy in any given country, was 1.21 for France and 0.97 for Germany. In contrast, social envy was much lower in the United States (0.42) and Great Britain (0.37).

Rainer Zitelmann is a German historian and sociologist. His latest book The Rich in Public Opinion http://therichinpublicopinion.com/ was published in May 2020.