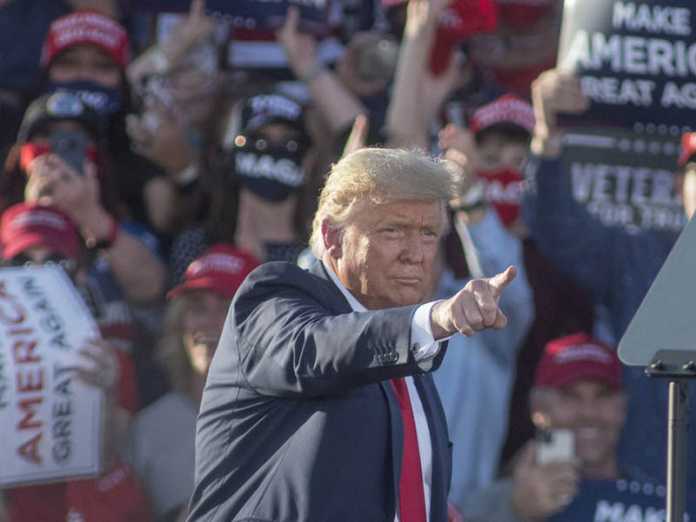 A US presidential election always draws intense worldwide interest, in part due to the spectacle, but also because the leadership of the most powerful country in the world has a significant bearing on international affairs. It is also a moment of immense cultural power which magnifies America’s global significance.

While political leaders and policy experts will watch the election through the prism of their strategic interests, most of the world will watch with a more nebulous sense that the fate of the world is somehow at stake. For better or worse, around the globe people tend to view the US through the figure of its president. This is certainly the case with Donald Trump, whose global celebrity has amplified feelings about the US.

The 2020 election symbolically aligns with a paradigm shift in the world order, a disassembling of western and more particularly American dominance. What is at stake here is the idea of the US as the world’s leading nation, an idea that forcefully shaped “the American Century” and is now fast dissolving.

Global perceptions of the US are regularly monitored by major polling organisations such as the Pew Research Center and Gallup. There are also myriad regional and national polls seeking information on the US’s reputation and influence. By almost all quantitative measures the US’s global standing has plummeted since the election of Trump and this downward spiral is more often than not associated with his leadership.

A Pew study in September 2020 noted that the number of countries with a favourable view of the US is “as low as it has been at any point since the Center began polling on this topic nearly two decades ago.” The survey showed ratings of “confidence in the US president” ranging from a low of 9% in Belgium to a high of 25% in Japan. 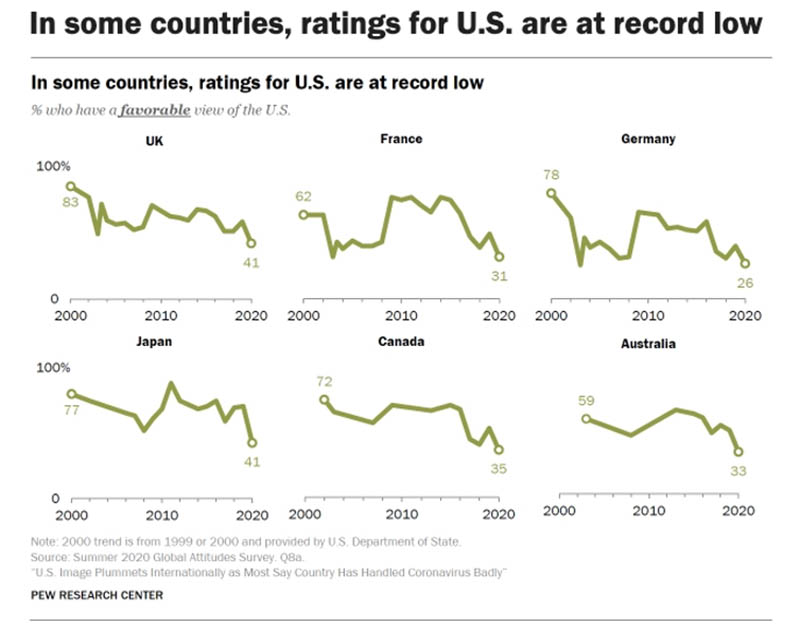 Several international polls link the decline in confidence in American leadership to Trump’s mishandling of the coronavirus pandemic, both nationally and internationally. Measuring such perceptions quantitatively has much room for error, but it’s hard to deny that the scale and consistency of these polls are indicators of the US’s maligned and depleted image and influence in the world today.

That sense of diminishing American appeal is evident not only in the polling but also in global media coverage of the US. This is hardly surprising given the images of domestic turmoil that travel swiftly in real time: scenes of overworked healthcare workers, of mass demonstrations over the police killings of African-Americans, of armed vigilantes challenging pandemic orders, and of wildfires raging in California.

The first presidential debate provoked shock and dismay in international news media. It was described as a “chaotic and virulent spectacle” (El Pais in Spain), as “mudwrestling” (The Times of India), as “a joke, a low point, a shame for the country” (Der Spiegel in Germany), as a “national humiliation for America” (The Guardian in the UK), and as evidence of the “recession of US influence, national power” (Global Times in China).

Since 2016, the European media has reported on a widespread and increasing sense of European disillusionment with the US, centred on Trump but also pointing to an acceleration of American decline. Writing in the Irish Times in April, Fintan O’Toole observed:

It is hard not to feel sorry for Americans … The country Trump promised to make great again has never in its history seemed so pitiful.

Simon Kuper in the Financial Times made a similar observation in October, writing that “European attitudes to Americans are shifting from envy to compassion.”

The end of the American century

Underlying this shift in global, and especially western, perceptions of the US is a deep but barely coherent disinvestment in the fantasy of “America” as a liberal and redemptive power, one that acts on behalf of a global common good. This has endured for many national political and popular cultures since the end of the second world war and until recently has been stoked by American soft power and popular culture. It is a fantasy that dramatises and idealises American narratives – the stock example being “the American Dream” – and makes “America” a screen for global desires and discontents.

The US has long functioned as a global mirror with many nations viewing it as the epitome of modernity and measuring their “progress” against that imagery. Fascination and contempt are bound together in this fantasy. It is dependent on what is known but cannot be acknowledged: a fear of and desire for American power. It provides other nations with the balm of calling out US hypocrisy in the misuse of its powers, hypocrisy which is often measured in the distance between American soft power rhetoric and hard power actions.

The US once fed the fantasy with confidence. When the magazine publisher Henry Luce published his famous essay The American Century in 1941, on the eve of the US entry into the second world war, he provided a mission statement of American exceptionalism. The essay expressed a vision of US political, economic and cultural power, of a pre-eminent US that would lead the postwar world by its example in advancing democratic ideals, free enterprise and “the American way of life”. It was a compelling vision of American hegemony that joined nationalism and internationalism in the interests of global leadership.

The fantasy is now fast unravelling as the American Century comes to an end. This has tallied not with the 20th century but more pointedly with the period between the start of the Cold War and the current implosion of the liberal world order. In recent years the relative decline of the US has been much remarked upon as a “post-American world” emerges, and nationalism, particularly an “America First” agenda, has displaced internationalism in American foreign policy.

Much international polling and commentary in recent years suggests that the US is losing its power to communicate, and is no longer seen as a cultural or political beacon. The common measurement of this is the claim that American soft power, understood as the power to attract rather than coerce, has been greatly reduced, not least because Trump and his administration eschew it as irrelevant to the promotion of “America First”.

While American liberals fret at the loss of America’s global cultural appeal in terms of soft power, they cling to a crude conception of the way cultural processes work and the impact they have. Cultural power takes many forms and the US continues to provide cultural and political influence across the world, though not necessarily shaped by the office of the president or the diplomacy of the State Department. A recent example is the global impact of the protests for racial justice and the international spread of the Black Lives Matter movement. 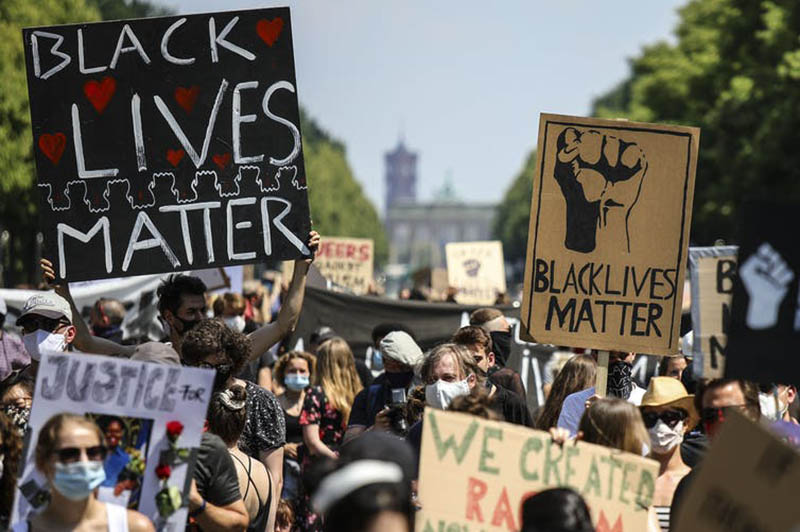 Throughout June 2020, people took the streets across the world in response to the protests in the US sparked by the death of a Black man, George Floyd, while in policy custody. Expressions of solidarity were the most common feature of the protests, but they also invariably connected with and expressed local matters of racial division and injustice. As they mutated across borders, the protests triggered activism and debates on police violence, racial profiling, the detention of asylum seekers and the removal of monuments.

These protests and conversations indicate the symbolic resonance of the American civil rights struggle across the world. A national reckoning with race in the US may go some way to restoring the country’s self-image and standing in the world.

The world should not underestimate America’s capacity for renewal, but nor should it underestimate its capacity for self-delusion and for packaging this belief in American exceptionalism as something to sell to the rest of the world. In short, the death of the fantasy of America as a liberal and redemptive power is not necessarily a bad thing – and the election of Joe Biden as president would be unlikely to renew it.

A reality check on American power, including its cultural power, is overdue. This entails taking stock of the ways in which the US has fomented a cultural backlashboth against liberal democracy at home and the liberal world order abroad. That backlash – put crudely, the people against the elites – resonates with ethno-nationalist and populist politics across the world.

With the waning of liberal democracy we are at a cultural tipping point in the west where opponents do not neatly line up as left versus right and where politics is increasingly defined by cultural values. Part of the significance of the 2020 US election as a global cultural moment is its dramatisation of this tipping point, posed between the insurgent forces of nationalism and the residual forces of liberalism.

The world will be watching, less in fascination than in bemusement and commiseration.

Professor Liam Kennedy is Director of the Clinton Institute for American Studies at University College Dublin. He has diverse research interests and teaching experiences, spanning the fields of American cultural and media studies, globalisation and Irish-US relations.

Professor Kennedy is a founding editor of America Unfiltered, a media platform for commentary on contemporary American foreign policy, politics and media.

How Cryptocurrency Can Help Non-profits and Investors Thrive in the ‘New...

Geopolitical Consequences of a Sustainable and Circular Economy

Is tax avoidance ethical? Asking on behalf of a few billionaire...

COVID-19 has shown that following the same road will lead the...

What we can learn about risk from the COVID experience