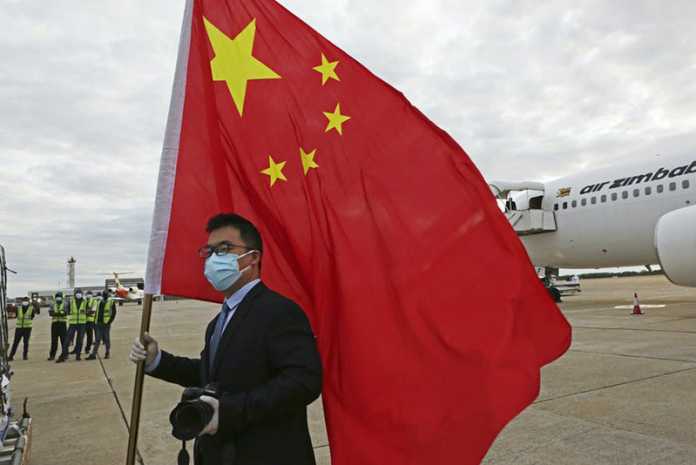 At the height of the COVID-19 pandemic, Chinese President Xi Jinping enjoyed prime real estate in the centre of Serbia’s capital, Belgrade: his face plastered across a billboard with the words “Thank you brother Xi”.

The sign, courtesy of the pro-government tabloid Informer, was in response to China sending COVID-19 medical supplies to Serbia. It joined a long list of pro-China offerings of thanks from nations around the world during the pandemic in the form of overt propaganda or more subtle media messages.

A new report being published today by the International Federation of Journalists (IFJ), which I co-authored with Louisa Lim of the University of Melbourne and Johan Lidberg of Monash University, has found Beijing’s global image has benefited from the pandemic, despite its origin in the Chinese city of Wuhan.

Over half of the 50 nations surveyed at the end of 2020 reported coverage of China had become more positive in their national media since the onset of the pandemic, while less than a quarter reported it had become increasingly negative.

The change was most favourable in Europe, which scored 6.3 on a scale of one to ten, where one is the most negative and ten is the most positive. China’s image plummeted in North America, coming in at 3.5.

The overall increase in positivity coincided with an uptick in Chinese outreach. Three-quarters of the journalists we surveyed said China had a visible presence in their national media, compared to 64% in a previous survey we conducted for IFJin 2019.

China has long attempted to seed positive narratives of itself in foreign media, while blocking unfavourable coverage and redirecting the world’s attention onto Western failures.

To do so, Beijing taps into foreign media ecosystems with tailored offers of access and resources. It exports its propaganda to foreign media organisations through content-sharing agreements and memoranda of understanding with state-sponsored media outlets like Xinhua and China Daily.

The desired outcome is for international media to amplify Chinese messages in their own languages in the pages of their own news outlets.

In this, COVID-19 acted as a catalyst. China activated its media dissemination channels overseas, inundating foreign outlets with domestic and international news offerings in local languages in a bid to seed positive stories about its management of the pandemic.

It also updated its toolkit with new tactics such as disinformation and misinformation, while clamping down on foreign reporting inside China through visa denials and journalist expulsions.

This vacuum in coverage of China by the foreign media created demand for stories from Chinese state channels. And this is being filled with state-sponsored content already available through content-sharing agreements.

As one of the first countries struck by the pandemic last year, Italy was the target of an aggressive Chinese disinformation campaign.

State-sponsored disinformation blamed Italy, not China, for instance, as the site of the initial outbreak of the new coronavirus.

Chinese foreign ministry spokesmen and ambassadors also shared on social media footage purporting to show Italians on their balconies applauding Chinese COVID aid as the Chinese national anthem was sung in the background. The footage was doctored from scenes that originally showed Italians clapping for their own medical workers.

As one Italian journalist commented during an IFJ roundtable discussion,

This fake news arrives even more rapidly than the virus.

More than 80% of the countries we surveyed expressed concern about disinformation in their national media. Respondents blamed China at about the same rate as Russia and the US. However, almost 60% of countries were unsure who was responsible for disseminating the false and misleading content.

Since the start of the pandemic, Chinese disinformation efforts have become a new part of the Chinese Communist Party’s propaganda tactics. State actors nicknamed “wolf warrior diplomats” took to social media platforms banned inside China, such as Twitter, to pump out a succession of conspiracy theories. These were then amplified by an army of Chinese ambassadors, foreign ministry spokesmen, and paid trolls.

This coordinated campaign to shift the COVID narrative across Western tech platforms has also been deployed to discredit democratic institutions, including the 2020 US presidential elections and the BBC’s reporting on China’s treatment of the Uyghur minority in Xinjiang.

.@SpeakerPelosi once referred to the Hong Kong riots as “a beautiful sight to behold” — it remains yet to be seen whether she will say the same about the recent developments in Capitol Hill. pic.twitter.com/91iXDzYpcO

How propaganda seeps into mainstream media

In Serbia, the Digital Forensic Center identified 30,000 tweets originating from Serbian accounts containing the keywords “Kina” (China) and “Srbija” (Serbia). These tweets praised Chinese aid and lambasted the European Union for its lack of assistance during the pandemic.

More than 70% of the content was produced by a huge pro-Serbian government network of bot accounts. During an IFJ roundtable discussion, one Serbian journalist said the government of President Aleksandar Vučić “does the work for China”.

Throughout the pandemic, Chinese medical aid was touted through mainstream Serbian media as “gifts”, despite the Serbian government’s refusal to reveal whether it had paid for the aid. Such coverage has a clear, positive impact on China’s image.

One study by the Institute for European Affairs found as many as 40% of Serbian citizens believed China to be the country’s largest donor of medical aid. Only 17% correctly named the EU.

Our report for the IFJ also found nations receiving China’s COVID-19 vaccine were more likely to cover China’s handling of the pandemic in a positive light.

Two-thirds of recipient nations reported coverage had become more positive over the past year. The dominant narrative in their national media, they said, was “China’s fast action against COVID-19 has helped other countries, as has its medical diplomacy”.

Despite this, most respondents cited Chinese attempts to control their national media as clumsy and ineffective.

In Italy, journalists talked about how the country has “the necessary antibodies” to identify fake news, while in Tunisia, they said China has “no impact on journalistic content”. And in Serbia, Chinese propaganda was deemed irrelevant.

But China’s efforts are making a real difference in many countries around the world, slowly but steadily redrawing the narrative landscape one story at a time.

Julia Bergin is a researcher at the Centre for Advancing Journalism at the University of Melbourne. She is also a journalist and producer, with a focus on China. For the past three years, Julia has investigated Beijing’s global media strategy and sphere of influence in an ongoing collaboration with the International Federation of Journalists. She has penned articles and serviced sound waves for The Guardian, The Japan Times, Disruptive Asia, The Little Red Podcast, and most recently Memorandum of Understanding.