On March 24, 2020, the Indian government announced a nationwide lockdown to curb the spread of coronavirus. In the past year, various state governments have intermittently continued to impose lockdown restrictions when the numbers of cases have risen, most recently during the severe second wave.

Shortly after the announcement of a lockdown, it was reasonably anticipated that the closure of business would detrimentally affect the social and economic conditions of millions of daily wage workers in the country. However, the sudden flight of millions of migrant workers from cities to their villages posed an unprecedented humanitarian challenge that grabbed the world’s attention. The media extensively reported on the conditions of migrant workers, who were stranded around the country without food or shelter, struggling to survive and return to their villages.

The national and state governments, civil society groups and the Indian Railways scrambled to arrange for their safe return and to provide basic amenities to the group.

India could have avoided this exodus or at least mitigated its severity with a closer look at the pattern of movement of migrant workers and a better understanding of COVID-19 as a biological disaster.

A migrant worker in ordinary circumstances voluntarily moves to a place in search of work. In India there are 139 million migrant workers who move from villages to cities each year to work in construction, manufacturing, hospitality, textiles, domestic work and industry. Here, the motivation to move from villages to cities is voluntary – internal migrants move to secure a better livelihood. When a migrant worker returns to her village upon the completion of employment, the decision to do so is voluntary as well.

But the movement of migrant workers because of the lockdown was neither voluntary nor for the betterment of livelihoods. Migrant workers were seen marooned along their journey back in places that were neither their place of work nor their homes, where they could receive any food or shelter.

This pattern is not one of voluntary migration but, as I have argued in a recent paper, one of internal displacement. 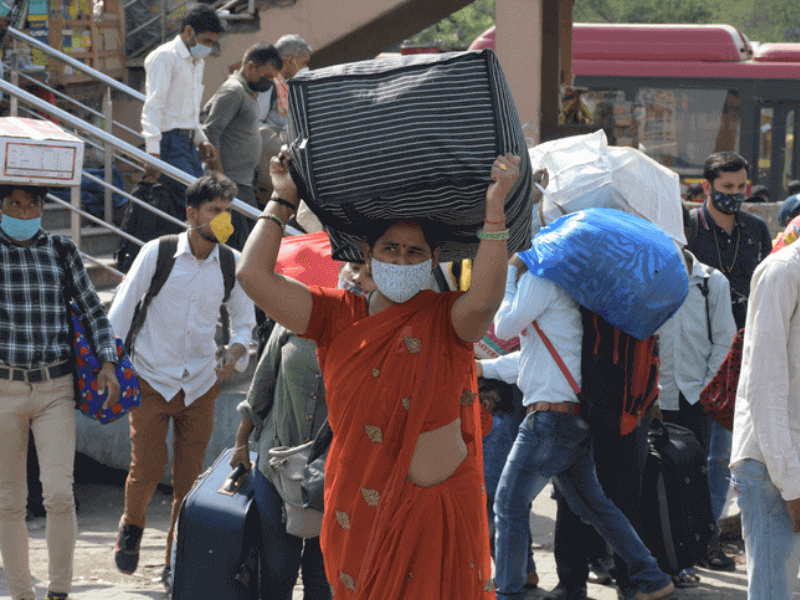 It’s reasonable to say that migrant workers became internally displaced persons (IDPs) in the process of reverse migration to their homes. Internal displacement refers to involuntary or coerced movement within the boundaries of a country. For example, the Indian Ocean tsunami of 2004 displaced approximately 650,000 people within India.

The similarity between the tsunami in 2004 and COVID-19 in 2020 is that, in both cases, people moved involuntarily to another place within the country for their own safety. The difference between the two is that the people fleeing the tsunami were recognised as internally displaced and in consequence legally protected through evacuation and rehabilitation measures, whereas those who were fleeing COVID-19 continued to be identified as migrant workers and left to the mercy of fate.

The recognition of the victims of the 2004 tsunami as IDPs can be traced to India’s well-established legal framework of managing natural disasters, including the protection of affected populations from displacement through evacuation and rehabilitation measures.

Prone to frequent cyclones, India regularly uses its 2005 Disaster Management Act to prepare for impending natural disasters, assess risks, relocate people, and mitigate impacts after the fact. The government could have easily invoked the act in the wake of the first lockdown, because it applies not just to natural disasters, but also biological disasters including epidemics and pandemics.

The Guiding Principles on Internal Displacement, a non-binding international framework, provides a list of natural and human-made causes for displacement. Under the guidelines, biological disasters from public health emergencies such as pandemics and epidemics fall within the definition human-made disasters.

Yet the tragic reality is that, in India, there was not enough precedent in recent times to understand COVID-19 as a biological disaster capable of causing displacement.

There is, however, recent evidence from the aftermath of the Ebola outbreak in West Africa in 2014. Following the outbreak, the Internal Displacement Monitoring Centre identified five displacement trends: internal displacement from fleeing the virus, fleeing quarantine, seeking healthcare, forced evictions and fleeing stigma, and fleeing violence and rights violations.

From this analysis, we can infer that the flight of migrant workers from the COVID-19 lockdown was indeed a pattern of internal displacement, driven by the need for survival, the loss of livelihoods and the violations of human rights such as the right to food, shelter, and human dignity.

The recognition of migrant workers as IDPs opens a host of legal avenues to enhance their protection and assistance needs. Identifying migrant workers in India displaced by COVID as IDPs would align domestic practices with international obligations, including human rights law and humanitarian law.

With this awareness in mind, future governments decisions on disease management must have a greater focus on ways to extend legal protection to displaced vulnerable groups. We need to recognise the many nuanced drivers of disasters, including infectious disease outbreaks like COVID-19.

The article was first published on The Conversation.

Malavika Rao is a PhD Candidate in International Law at the Graduate Institute, Geneva (IHEID). Her areas of academic interest include international migration law, environmental law, issues of climate change and starvation.