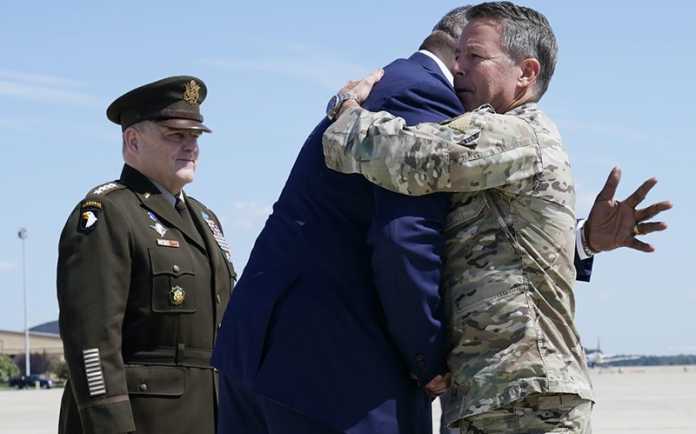 As both a scholar and practitioner of foreign policy and national security, Jacobson in the interview below offers both personal and professional perspectives on the U.S. withdrawal from Afghanistan. The interview has been edited for length and clarity.

As an Afghanistan veteran, what do you think at this turning point as the U.S. withdraws from the country?

I’m saddened by the policy decision to completely withdraw. I think it’s a poor choice and I believe that both President Trump’s and President Biden’s assessment of the issue was based on their belief in a false choice between a so-called “endless war” and full withdrawal.

But I can live with lousy policy decisions. I’m more concerned about my former Afghan colleagues and their families and whether we can do our part to make sure they can evacuate safely if the need arises. What gives me hope is that the Biden administration is taking this issue seriously and working through a process to get former interpreters, advisers and their families to the U.S. under the special immigrant visa program.

Each time I served in Afghanistan had a significant impact on me, and each in particular ways. I had a colleague address this issue the other day by saying “I’m just trying to absorb the fact of being on the losing side in a war.”

I don’t feel that way at all and, in fact, rigid conceptions of winning and losing are what created the misunderstanding about what we had to do to succeed in Afghanistan. We focused too much on military victory – defeating the terrorists, defeating the insurgency. What happens on the battlefield is a sideshow. There’s no victory or peace until there’s a political settlement and that can’t be imposed by the United States – it will only come when the intra-Afghan peace talks – between the Taliban and the Afghan government – succeed.

Likewise, I don’t feel most veterans of Afghanistan or Iraq carry the burden that U.S. veterans of the Vietnam War had to struggle with, in terms of a population that resented their service.

Is there a story you tell colleagues that epitomizes your time in the country?

As an academic, I’ve come to understand my time as a series of stories that, when taken together, show the dissonance that a war like Afghanistan brought to some of us who served.

I had an incredible job during my tour there as an intelligence officer in 2006. Some evenings I’d be at a formal dinner at an Afghan official’s home or a foreign embassy, and then after midnight I’d be in combat gear out on a mission, going after a high-value target with NATO Special Operations Forces.

I spent a lot of time on my own or with a small group, and my nights were busier than my days. Like many others, I left a part of me there that I’ll never get back. But it was worth it, especially when thinking about how our intervention not only protected the United States, but also encompassed what we did for the children in Afghanistan.

I spent a lot of time each week at an orphanage outside of Kabul. I went there after missions or just to see the kids and play with them and practice my rudimentary Dari. I arranged with some Navy vets in the U.S. to send soccer balls for the kids, and one time some friends of mine helped arrange a fundraiser in Washington, D.C., for the orphanage.

Everyone wanted to come with me to the orphanage – folks from my unit, colleagues from the U.S. Embassy – even a Hollywood star who was in-country came to love the place. This was my own pet project, not a formal mission, but I loved it – it reminded me what I was fighting for, to help the children of Afghanistan have a future.

That may not be the “disrupt, dismantle, and defeat” al-Qaida mission that U.S. presidents would like to have had, but one that reflects that in the end, wars are about people. And frankly, it was the most meaningful.

What are the three most important things America has achieved in Afghanistan over the past 20 years?

Certainly, American intervention has prevented terrorists from using Afghanistan as a base for terrorist attacks against the U.S. and our allies. This was, after all, the rationale for the invasion of October 2001, to eliminate the al-Qaida haven and topple their Taliban hosts.

This achievement may be fleeting, however, as the withdrawal of U.S. forces will diminish the capacity to identify and take action against future threats. After all, the threat of international terrorism based in Afghanistan is not over for good. Groups such as the Islamic State still use the country as a base, and it’s unclear whether or not the Taliban will give up support for an al-Qaida presence in Afghanistan.

The U.S. military presence in Afghanistan, especially during the surge of 2009 to 2011, created greater Afghan military capability and destroyed some Taliban capability. This put the Afghan government in a better position to sit down at the table and find a peaceful way forward.

The challenge is, whether this work by the U.S. military was enough so that the Afghan National Security Forces can handle the Taliban on their own. Other than Afghan Special Operations Forces, their record of tactical success against the Taliban is mixed, and that is cause for concern.

Most importantly, American and NATO intervention took the people of Afghanistan back toward a more free and open society that many had not experienced since the 1960s and 1970s. There are millions of girls in school. Women now own businesses and are actors, singers and activists. There are 68 women in the Afghan Parliament, or 27% of the total, something impossible under Taliban rule, where there was an almost complete ban on female employment.

Likewise, maternal mortality has been cut in half, the literacy rate in Afghanistan is higher, and more than 67% of Afghans have access to clean water.

President Biden has said, “It’s the right and the responsibility of Afghan people alone to decide their future and how they want to run their country.” What are some of the challenges Afghan President Ashraf Ghani and his people face?

The lack of a U.S. military presence fundamentally changes the security dynamics in Afghanistan, reducing the leverage necessary to bring the Taliban to the negotiating table, especially with the loss of U.S. air power.

Additionally, security is a precondition to development, and it’s unclear how long the international development community, which has had a large presence in Afghanistan since the fall of the Taliban, will be able to work, or whether Afghan nationals will be safe implementing these projects.

A political solution is the only way this war ends – and not one imposed by the United States, but one agreed to by Afghan parties. This was one of the great failures of the agreement on interim governance for Afghanistan negotiated in Bonn in December 2001 – not having a seat at the table for the Taliban.

Additionally, while the U.S. and the Taliban reached an agreement in February 2020 – albeit one the Taliban are not living up to – the so-called “intra-Afghan” peace talks between the Afghan government and the Taliban underway in Doha are not yet complete.

President Ghani must get the Taliban to the table to discuss a permanent cease-fire and a political settlement. I worry, however, this will be tough to do with the Taliban once again growing in power. In the end, it may be the U.S. withdrawal that, ironically, prevents the Afghan people from deciding their future.

A scholar-practitioner of foreign policy and national security, Jacobson most recently served as the John J. McCloy Professor of American Institutions and International Diplomacy at Amherst College and prior to that at Georgetown University’s Walsh School of Foreign Service. His teaching and research interests include the history of propaganda and political warfare as well as how identity groups have used military service for community validation in the United States.