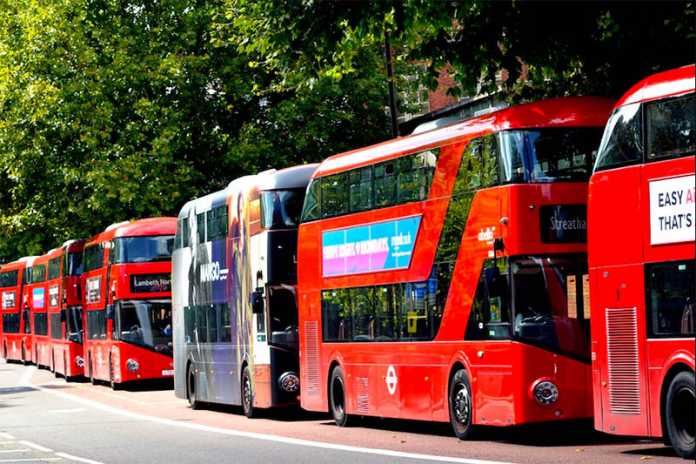 President Biden and the European Union are proposing to spend trillions of dollars to decarbonize our economy – with a special focus on electric vehicles (EVs). Indeed, transportation is now the largest source of greenhouse gas emissions in the U.S., and those emissions are increasing. It is a common perception that transportation is difficult and expensive to decarbonize. That perception is wrong, at least relative to other activities and sectors.

In two major studies of transportation that I helped lead, one for the U.S. and the other for California, we came to the startling conclusion that the U.S. and California can achieve carbon neutrality in road transportation by 2045 at little or no net cost to society and with major savings to consumers and the economy. A significant near-term investment would be needed for new vehicle and fuel technologies and energy infrastructure, but these investments will yield a strong payback. For California, we estimated the additional cost to the economy through 2030 would be about $10-20 billion – which is about 1-2% of what consumers and businesses would already be spending on vehicles and fuels.

Starting around 2030, though, consumers and the economy would start saving money. The payback comes mainly from the lower cost of electricity, on a per-mile basis, compared to gasoline and diesel fuel, as well as less maintenance for EVs, and the shrinking purchase cost of EVs. Due to these savings, the total cost of owning and operating EVs will soon reach parity with gasoline cars and diesel trucks; for some models and usage patterns this could happen in the next five years.  Our scenarios also include adoption of fuel cell vehicles, especially for heavy trucking, and this technology transition takes somewhat longer to pay back.

Battery improvements are key.  Battery costs are dropping dramatically, rivalling the solar energy revolution. Since 2010, the cost of batteries has dropped roughly 85%, and are expected to continue dropping into the foreseeable future. As scale economies increase and R&D costs spread across more vehicles, the cost of manufacturing EVs is likely to trend downward for decades. 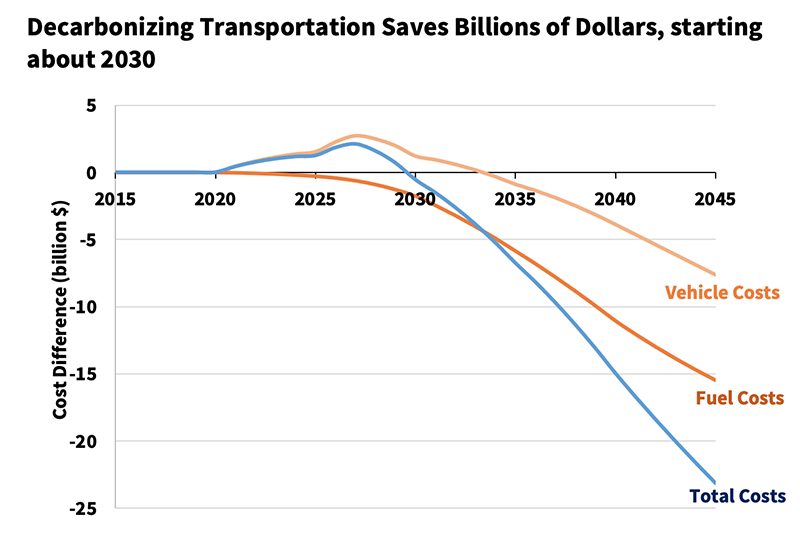 The graph above represents the surprisingly large cost savings for California’s economy. Our studies find that the cost of some new EVs and fuel cell vehicles will be higher than the cost of comparable conventional cars and trucks for the next 10-15 years, but the gap will continue to shrink. By around 2030, the cost premium of EVs will be offset by lower fuel and maintenance costs, resulting in EVs beginning to save money for consumers and the economy. The costs shown in the graph include all cars and trucks, as well as the cost of charging infrastructure and hydrogen stations. Most of these EVs will likely rely on batteries, but we assume an increasing share will use fuel cells to convert hydrogen to electricity, especially in larger trucks. For the scenario, we assumed that by 2040 nearly all vehicles sold would be powered by electricity or hydrogen – which is not as aggressive than what General Motors, Governor Newsom and many others are positing.

By around 2030, the cost premium of EVs will be offset by lower fuel and maintenance costs, resulting in EVs beginning to save money for consumers and the economy.

We also find that savings increase over time, in the case of California, reaching about $23 billion per year in 2045, for a cumulative net savings of $177 billion from 2031 to 2045. For the U.S. as a whole, adjusting for market size, the net cost savings could be about $1.5 trillion. These savings are still greater if one considers the benefits of cleaner air, heathier people, and reduced climate disruption. For California, the annual health savings for this decarbonization scenario were estimated at about $30 billion in 2045.

There is a long way to go, however, to achieve these benefits. In 2019 and 2020, only 2% of national passenger vehicle sales were electric, and even in EV-friendly California, the market share was only 8%. Ramping up to 100% EV sales will require a massive effort. Regulatory targets need to be strengthened, more incentives are needed for buyers, chargers must become convenient for all, and people need the opportunity to acclimate to a new driving experience. In parallel, the electricity grid must become nearly zero carbon.

Strong EV purchase incentives will be needed for two decades or more. These incentives need not, however, come from taxpayers; via innovative policies, they could come from fossil fuel companies and buyers who persist in buying gasoline and diesel vehicles. For example, in California today, electric utilities accrue credits for selling electricity to EVs under the Low Carbon Fuel Standard program. These credits are aggregated statewide and converted into a rebate of $1500 to EV buyers. These rebates are in essence subsidized by oil companies, who buy credits from those electric utilities. Another mechanism, utilized in several European countries and included in a bill in the California legislature is “feebates.” In this case, fees are assessed on buyers of “gas guzzlers”, and those funds are used to provide rebates to buyers of EVs (and possibly to other energy efficient vehicles).

Achieving carbon neutrality will not be simple or easy, and it will be disruptive. But the narrative needs to change. Decarbonizing transportation, relying on battery and fuel cell electric vehicles will be a boon to the economy.

Dr. Daniel Sperling is Distinguished Blue Planet Prize Professor of Civil Engineering and Environmental Science and Policy, and founding Director of the Institute of Transportation Studies at the University of California, Davis (ITS-Davis). He holds the transportation seat on the California Air Resources Board and served as Chair of the Transportation Research Board (TRB) of the National Academies in 2015-16.