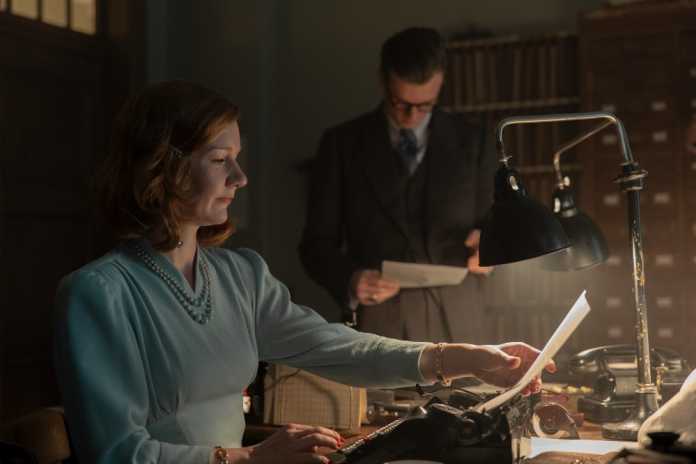 In September 1938, Britain, Germany, Italy and France met in Munich as a new European war loomed. Hitler was demanding to annex the Sudetenland in western Czechoslovakia so in a bid to avoid war the Four Powers Agreement was signed and Czechoslovakia would surrender its border regions and defences. British Prime Minister Neville Chamberlain had Hitler sign a separate Anglo-German agreement and triumphantly called it “peace for our time”. Known as the Munich crisis, this event was the climax of appeasement.

A new film, Munich — The Edge of War, is not a dramatisation of this pivotal event but a work of “what if” historical fiction, based on Robert Harris’s 2017 political thriller of the same name. The fictional male leads Hugh Legat and Paul von Hartmann are loosely based on the British AL Rowse and the German Adam von Trott, a good deal of poetic licence taken regarding their respective political insights, foresight and proximity to the centre stage of diplomatic events. The suspense of the story hinges on whether they together can change the course of events.

The film aims to be relatable by subtly framing the strategic and ethical quandaries faced by the appeasers and the would-be anti-Nazi resistors in ways that will resonate with audiences in our own age of crisis and rising extremism. Indeed, in the news now Russia is massing troops on the border of Ukraine to prevent it joining NATO, and some commentators are comparing this to the Munich Crisis of 1938.

The portrayal of Neville Chamberlain is nostalgic, highly sympathetic and (perhaps, too) attractive. Jeremy Irons’ Chamberlain is the saviour of peace, the epitome of respectability, good manners and tradition – a striking foil for the current resident of 10 Downing Street, a prime minister who uses the same austere spaces for, we now know, far less serious business.

The vast majority of ruminations about the historical plausibility of the film will focus on the characterisation of the leading great or guilty men. However, who are the “what if” women in the film? Are they plausible representations of the crisis women of Munich?

Munich – The Edge of War features strong, intelligent, well-informed women characters whose actions have a direct bearing on events. The historical fictional genre allows for an attempt to right the wrongs of the very real male-exclusivity and unexamined sexism of interwar diplomacy.

There is Lenya, the German-Jewish friend of both Hugh Legat and Paul von Hartman. Pamela Legat is the protagonist’s wife, standing in for British mothers faced with the terrifying prospect of war from the air, making wrenching decisions about evacuating children, and looking at this new world through the dehumanising visor of newly acquired gas masks.

Third, the film takes one of Chamberlain’s typists on a flight of fancy, so to speak. She is given the name Joan Menzies. While women typists did accompany Chamberlain by airplane to the Munich Conference, as far as we know none served overt or covert functions in the negotiations.

Fourth, on the German side, there is Helen Winter, widow of a General, holding some kind of administrative ministerial post, and both von Hartmann’s love interest and co-conspirator – the pretty face of German anti-Nazism.

These token women are all “great” rather than guilty women, with assorted qualities of courage, heroism, pathos, insight and intuition, not to mention sex appeal. They are all variations of the mythical Greek priestess Cassandra – cursed to utter true prophecies, but never to be believed about the consequences of the naive acts performed by men.

To avoid giving away the plot, I won’t give any more detail. But in terms of the historical record, some spoilers are called for. Indeed, the main problem with the plot devices and dramatic functions assigned to these women characters is that women just did not have this kind of access to power, certainly not in an official capacity.

To say that women would not have been able to act in the events as they do in the film is not to say that women were absent from history, even at the level of high politics and diplomacy. I suspect elements of the life story of Sheila Grant Duff have been mined for the composite heroines.

Grant Duff and von Trott developed a close friendship at the University of Oxford in the early 1930s. They fell out over politics when he became a supporter of the Nazi regime, and as a woman, she blazed a trail as a foreign correspondent and expert on and advocate of Czechoslovakia. Her best-selling Penguin Special Europe and the Czechs (1938) was published just days after the Munich Agreement was signed.

Moreover, a handful of women MPs, from the already small group of women who were MPs in the late 1930s, were formidable critics of appeasement. Amongst them were the Independent Eleanor Rathbone, Labour’s Ellen Wilkinson and Chamberlain-scourge the Conservative Duchess of Atholl, who made sure that all British MPs were presented with the uncensored translation of Hitler’s Mein Kampf. Other women MPs led from the front as Chamberlain’s fan base, including Conservative MPs Nancy Astor, Florence Horsbrugh and Marjorie Graves. Also, as a collective, the “millions of mothers” of Europe were understood to be the enthusiastic supporters of Chamberlain, the saviour of peace.

Munich — The Edge of War, a brooding and atmospheric fictionalisation of the Munich Crisis, does a commendable job of writing women into the drama and inviting audiences to take a gender-blind view of the event. But it is also a welcome invitation to look more closely and carefully at the historical record and acknowledge the opportunities as well as the significant constraints real women faced in the 1930s to play the kind of decisive roles created for them in this film.

This article was originally published in The Conversation on 21 January 2022. It can be accessed here: https://theconversation.com/munich-the-edge-of-war-women-in-historical-films-are-too-often-unrealistic-175285

Julie Gottlieb is a Professor of Modern History at the University of Sheffield. Her interests are, broadly, in modern British political history (principally the period 1918 to 1945), the history of political extremism (with a focus on right-wing extremism in Britain), women’s history and gender studies (particularly women in politics, and the construction of gender identities in the political sphere), comparative fascism (particularly gender and fascism in comparative perspective), history of emotion, and race and ethnicity in the British context.