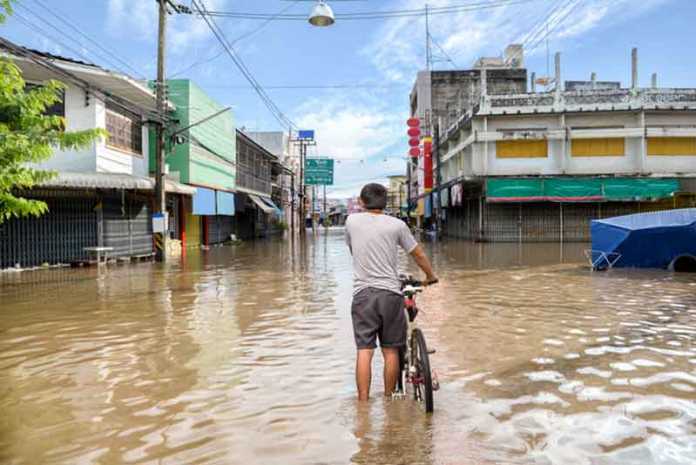 When hurricanes Eta and Iota barrelled into Central America in November 2020, they flooded towns and cities, caused catastrophic losses in the agricultural sector and contributed to food insecurity. In all, 4.7 million Hondurans were affected, and tens of thousands decided to leave, forming migrant caravans in a desperate attempt to rebuild their lives in the United States.

My research studies the relationships between law, people and the environment. In refugee law, people become refugees when they have a well-founded fear of persecution in their country of origin. Persecution is currently limited to grounds of race, religion, nationality, membership of a particular social group or political opinion. That means when people move due to environmental degradation or disaster, they are not, in the legal sense of the word, “refugees.”

But international refugee and human rights law can no longer place the focus solely on social and political persecution. It must be overhauled to consider climate change and include “deadly environments” as a form of persecution.

The concept of deadly environments accounts for the social, political and ecological conditions that force someone to move. Including it in legal definitions would establish the environment as contributing to conditions of human rights deprivation and persecution.

The World Bank estimates that without radical and concerted efforts to slow climate change, 216 million people will be displaced within their own countries by 2050. With the scale of climate-induced migration, it’s inevitable that millions will seek refuge across borders, even if they are invisible to refugee law.

Migration researchers agree that it is often inaccurate to link migration choices to a single event. It has become common to examine climate change as one in a nexus of factors, including violence, conflict and disaster.

The uncertain speed of climate disruptions complicates matters further. Their onset can be slow, like ongoing droughts that cause food insecurity, or fast, like hurricanes and floods that destroy homes and crops.

Given this, how can we define people who have been displaced by climate? There is no internationally accepted definition of climate-impacted migrants.

The Canadian Association of Refugee Lawyers uses the term “climate migrant,” whereas a report by the White House uses “climate change related-migration” as an umbrella term. Some use the term environmental migrants, others use environmentally displaced peoples. Like some other adamant outliers, I use the phrase climate refugees to underscore the agency of those seeking refuge.

The debate over definitions misses the point. As British geographer Calum T. M. Nicholson explains, “the key issue is not the cause of movement, but the rights violations suffered by migrants.”

According to the Office of the United Nations High Commissioner for Human Rights, climate change impacts the human rights to life, self-determination, development, health, food, water and sanitation, adequate housing and cultural rights. One only need to think about the 400,000 livestock herders in Southern Ethiopia who were displaced by climate-related drought between 2015 and 2019. They continue to require assistance for food, water and shelter.

Shifting the focus to deadly environments makes it clear that they are produced not only by climate change, but also by the practices upheld along borders.

The Transnational Institute, an international research and advocacy institute, reports that the world’s wealthiest countries spend more on militarizing their borders than they do on responding to the climate crisis. This often includes building walls, developing surveillance technologies and hiring armed border guards. According to the institute, rich countries are building a “global climate wall” to keep out people forced to migrate due to climate change with deadly consequences.

In her book The Death of Asylum: Hidden Geographies of the Enforcement Archipelago, Alison Mountz, a geographer at Wilfrid Laurier University, describes the steady development of asylum processing in places far away from physical borders, such as Australia’s offshore processing camps in Papua New Guinea and Nauru. Mountz argues that the growth of offshore detention centres contributes to the physical deaths of asylum-seekers, as well as their political deaths, as news of drowned migrants becomes mundane and normalized.

The UN International Organization for Migration (IOM) has documented the deaths of nearly 46,000 migrants en route to safety since 2014. An estimated 23,000 have drowned in the Mediterranean Sea.

The border-crossing between the United States and Mexico is particularly deadly, with 2,980 deaths recorded since 2014. According to the IOM, the “main direct causes of death identified in this area are drowning … and deaths caused by harsh environmental conditions and lack of shelter, food and water.”

International refugee and human rights law must be urgently overhauled to recognize deadly environments as sites of persecution.

Towards a new protection regime

The United Nations Refugee Agency has already established links between climate change and persecution. It finds that when a state is unwilling to respond to humanitarian needs that are the result of climate change, there is a “risk of human rights violations amounting to persecution.”

Deadly environments, including those transformed by climate change whether suddenly or over long periods of time, need to be considered sites of persecution. Their presence should trigger state obligations to provide protection for peoples forcibly displaced by climate change.

Central to this effort is establishing relationships among law, humans and the environment. This is one step towards recognizing that people displaced by climate change are, in fact, refugees.

This article was originally published in The Conversation on 14 January 2022. It can be accessed here: https://theconversation.com/environmental-disasters-are-fuelling-migration-heres-why-international-law-must-recognize-climate-refugees-173714