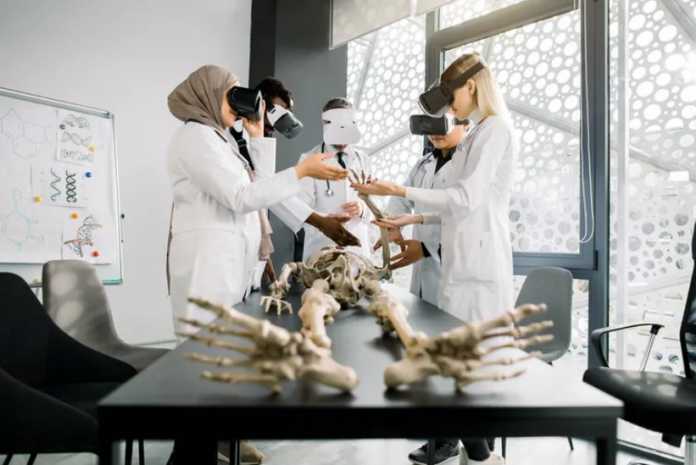 The metaverse is a virtual world in which users, represented by an avatar, can shop, socialise, take part in leisure activities – and learn. Its development has become a priority for many tech companies, including Facebook (which recently changed its company name to Meta) and Microsoft.

In a recent video presentation, Facebook CEO Mark Zuckerberg outlined the ways in which the metaverse would supposedly revolutionise life. Education was a key focus. Learning would become an immersive experience. By donning glasses or a headset, students could virtually “teleport” to any place or time. They could bring any object – a planet, a human organ, a car engine – to them to learn about it.

Some aspects of the metaverse have already made their way into universities. The real revolutionary potential of the metaverse lies in how it allows for further profit to be made in higher education. As my recent research on digital technologies and higher education shows, these developments may further monetise the student experience and exploit the work of academics.

The metaverse promises a joined-up online experience, in which a single avatar can move between spaces – such as an online shop and a lecture theatre. However, many of the individual innovations mentioned in Facebook’s presentation already exist in some forms.

Online worlds such as Second Life and even the block building game Minecraft are used by universities. They can enhance lectures or allow distance learners to virtually visit a campus. Virtual reality simulations help students in medicine or architecture practice skills that are difficult to rehearse in real life.

The metaverse will allow students to have an increasingly “cyber-physical” university experience, where the virtual world merges with the real one. Many students have already experienced something similar. During the pandemic, learning has shifted between online and in person.

In his presentation, Zuckerberg described how the metaverse would lead to the employment of developers and creatives to build new teaching environments. However, this industry is already up and running. An example is online “edutainment”, where games facilitate learning through a combination of education and entertainment.

The metaverse has the potential to change how a university education and the work of academics is monetised. A university lecture used to be delivered in real time, by a real lecturer to a limited real audience of students – a single commodity. The rise of virtual environments such as Zoom have changed this.

Now a lecturer is often teaching both an audience of real students and a virtual audience simultaneously. The in-person lecture and the virtual presentation represent two commodities which can be sold and bought, increasing productivity and profits. In the metaverse, what was originally one lecture could become available in multiple formats.

If recorded academic lectures become the intellectual property of universities rather than individual lecturers, the metaverse academic might find their words and ideas repackaged and presented through artificial intelligence in the metaverse. These technologies could allow for the production of an infinite number of lectures delivered by a range of animated and avatar academics.

It will be possible for money to be transferred between the metaverse and reality. Students may find that their learning can be paid for in a variety of new ways. This might be buying a virtual seat in a lecture hall with a particularly entertaining animated professor, converting a qualification earned in the virtual world into a real-world certificate or paying fees in bitcoin.

Ultimately, the metaverse might result in the end of some traditional forms of university education. Rather than attending a single bricks-and-mortar institution, students might flock to the cyber-physical realm instead. In the metaverse, they could learn from virtual experiences provided by a range of global universities.

Academics might become edutainers, working with developers to create experiences for students. The future for university lecturers might lie in self-employment, providing tailor-made learning experiences for a range of customers.

Paradoxically, the rise of the metaverse may eventually lead to the creation of face-to-face alternatives. In this hypothetical future, academics who find themselves replaced by AI lecturers and students who cannot afford state-of-the-art online learning experiences will turn to in-person, co-operative education.

Students whose education has shifted online during the pandemic have been increasingly demanding a return to face-to-face lecturing. It may be that the metaverse is not the inevitable future of education after all.

This article was originally published in The Conversation on 9 November 2021. It can be accessed here: https://theconversation.com/facebook-the-metaverse-and-the-monetisation-of-higher-education-171036

John Preston is an Economic and Social Research Council (ESRC) Leadership Fellow in Conflict, Crime and Security. John works on the sociology of disasters, emergencies and existential threat as well as the sociology of education.

His new book is “Artificial Intelligence in the Capitalist University: Academic Labour, Commodification, and Value”.

His work considers the racial and classed contexts of preparedness campaigns for disasters and emergencies. This has involved analysis of preparedness campaigns and films from the Cold War in the UK and US, reappraising working class children’s agency in the Aberfan disaster, community case studies on the racialization of public information for terrorist attacks, comparative analysis of national cultures of preparedness and critiquing popular conceptions of existential threat from nuclear war to A.I. ‘super-intelligence’. His latest book ‘Grenfell Tower: Preparedness, Race and Disaster Capitalism’ (2019) uses Marxist value critique and Critical Race Theory to argue that disaster preparedness increasingly works against working class and racialised populations as exemplified by the Grenfell Tower fire.