The Home Office has unveiled plans to use “turnback” tactics in the English Channel, with the border force compelling small boats carrying migrants to return to French waters.

The move is the latest in a series of strict immigration policies by Home Secretary Priti Patel, following the introduction of a controversial nationality and borders bill in July that seeks to criminalise arrival in the UK without permission.

The practice of turnback or pushback of migrant boats is not new. Australia, Greece and Italy have all been criticised for similar policies, with the UN Special Rapporteur on the Human Rights of Migrants calling it a “cruel and deadly” practice that states must end immediately.

More than 13,500 people have crossed the English Channel so far in 2021. The ongoing humanitarian crisis in Afghanistan highlights why people risk their lives making dangerous journeys in small, unsafe boats.

As the Strait of Dover is the busiest shipping route in the world, pushbacks could be extremely dangerous. Reports suggest that the UK’s turnback policy is only applicable to “sturdier, bigger migrant boats” and in “very limited circumstances”. The government says it has legal advice that allows it to do so under maritime law.

It is a fundamental and longstanding obligation of international and maritime law to render assistance to persons in distress at sea. Article 98 of the UN Convention on the Law of the Sea 1982 (LOSC) mandates that every state require its ships “to render assistance to any person found at sea in danger of being lost”.

Gérald Darmanin, the French interior minister, has stated that France would not accept any practice that breaches the law of the sea. Indeed, implementing a blanket “turn back boats” policy would be to break international law.

The UK government claims it can lawfully utilise this practice in a limited and specific way – certain boats in particular circumstances – but is yet to confirm how Patel has become “the first home secretary to establish a legal basis” for this.

Foreign vessels have a right of innocent passage in a state’s territorial sea (up to 12 miles from shore) under article 17 LOSC. If passage is not innocent, such as when domestic immigration laws are breached, states can take necessary steps to prevent passage. For seaworthy vessels, this is generally unproblematic. It may be that the UK government expects to rely on some iteration of this principle.

But if a vessel determines and justifies that it is in distress, it can enter the state’s territorial sea, according to an exception in article 18 LOSC. The duty to render assistance is also still applicable, even where the state believes that migration offences have been committed by those in peril.

France says that a turnback policy would negatively impact its cooperation with the UK. There are no international waters in the Dover Strait, the narrowest part of the Channel, which is divided between the UK and France’s territorial waters. France simply may not permit the UK into their territorial waters if returning migrants by force, triggering a stand-off. 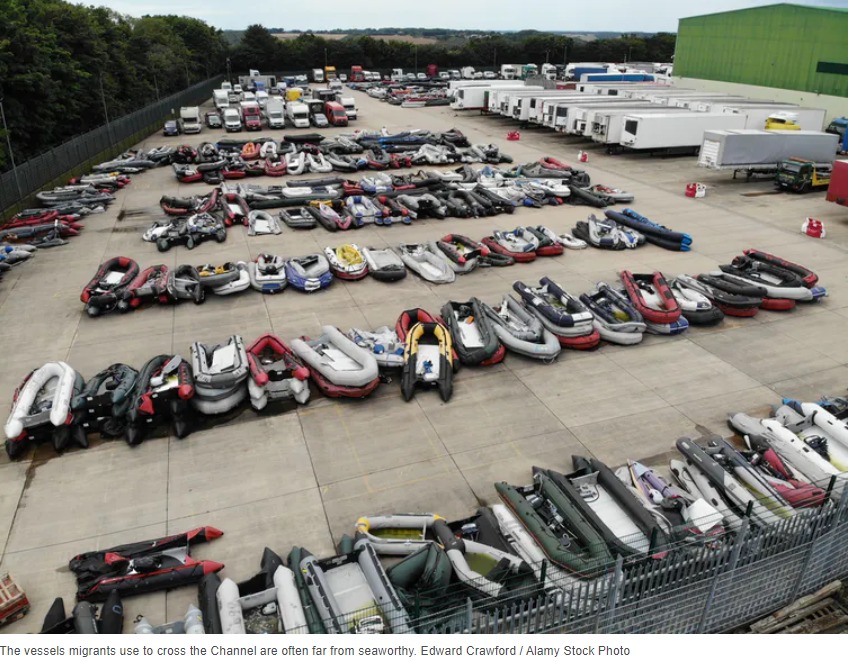 Beyond the law of the sea, when officials start to exercise effective control over another vessel at sea, by rescuing or physically towing boats back, human rights obligations come into play.

Hirsi Jamaa v Italy, a case considered by the European Court of Human Rights, involved Italian authorities’ interception of migrants at sea, forcibly returning them to Libya. The court concluded that the applicants were under the “continuous and exclusive de jure and de facto control of the Italian authorities” during the transfer, meaning Italy had an obligation to protect their human rights.

Human rights at sea expert Sofia Galani also affirms that people in the territorial waters of a state are within its jurisdiction for the purposes of human rights, which the state must respect and protect.

Such rights would include giving people access to a procedure that determines their refugee status, and ensuring that there is no collective expulsion of people. In the Hirsi case, the court held that Italian authorities violated the European Convention on Human Rights by not examining each applicant’s individual situation.

When officials turn back boats, they risk breaching the rights and obligations enshrined in international human rights law. The exercising of these rights is not affected by any potential migration offences that may have been committed. There could also be breaches of refugee law depending on the circumstances, such as the principle of non-refoulement, which prevents states from forcing asylum seekers and refugees back to a place where they may face persecution.

There is no obligation in international law to seek asylum in the first safe country, and there are many reasons why individuals choose not to do so.

Political sociologist Lucy Mayblin states that there is virtually no way for refugees to safely and legally travel to the UK, due to carriers being fined if they transport individuals without visas, and tight controls at the UK border in France. People are left feeling that they have no choice but to make risky journeys.

In taking a hardline approach to immigration through border security and policing, the UK must ensure it adheres to the clear obligations within human rights and refugee law, as well as the law of the sea.

This article was first published in The Conversation.