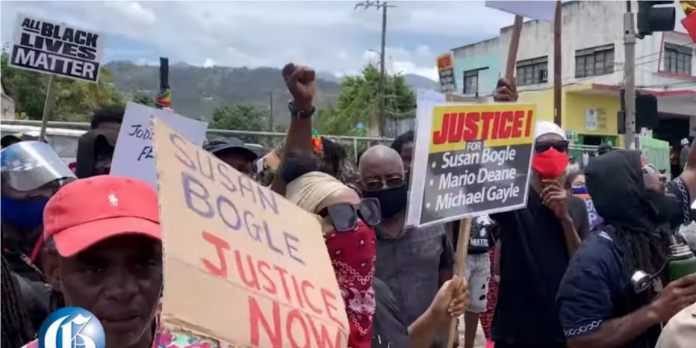 Across the world, Black Lives Matter protests are continuing in the wake of the killing of George Floyd in Minneapolis. In the US and many European countries, protests have led to the toppling of colonial and slavery monuments and demands for far-reaching changes to address systemic racism.

But Black Lives Matter protests have also been held in black-majority countries where they have raised some uncomfortable truths. In Jamaica, protest and public debate in recent weeks have focused on the island’s high rate of homicides by police and other social injustices. But they have also raised debates about colourism – discrimination against people with a dark skin tone.

On June 6, a small Black Lives Matter protest was held outside the US embassy in Kingston. Protesters focused particularly on extrajudicial killings by police and other security forces. According to Amnesty International, Jamaica has one of the highest rates of lethal police shootings in the world.

Two days after George Floyd was killed in late May, Susan Bogle, a poor woman with an intellectual disability, was allegedly shot in her home during a police-military operation in August Town, a neighbourhood of Kingston. Protesters carried placards with her name, as well as those of other victims of police brutality, including Mario Deane, who died in police custody in 2014.

Protesters stressed that these victims of police brutality had one thing in common: they were poor, and because of Jamaica’s complex class and colour relations, mostly dark-skinned.

Several days after Bogle’s killing, Jamaica’s prime minister, Andrew Holness visited her family and said the incident would be fully investigated. But he faced an online backlash from those who said the visit was an insensitive PR stunt rather than an attempt to meaningfully address the high rate of police homicides, gang violence or the general plight of poor Jamaicans.

But while public debates both in newspapers and on social media largely focused on the extrajudicial killings, questions were also raised, especially by young Jamaicans about the role of colourism in Jamaican society.

The prevalence of skin bleaching is only one expression of colourism in Jamaica. Such prejudice has its origins in slavery, when slave children fathered by white planters or overseers – often as a result of sexual violence – were given special privileges. These included exemption from working in the fields on account of their closeness to white men and, by definition, whiteness.

Colourism and white-on-black discrimination in Jamaica, the US and other parts of the Americas, should be seen as two sides of the same coin. Colourism would not exist without European colonialism and the use of enslaved Africans on sugar plantations. In my own research, I’ve argued that colourism in Jamaican society has been a public secret – something that is commonly known but rarely openly acknowledged. Those who have dared to expose it have usually been vilified. And today that increasingly means being called names and receiving threats on social media.

The public debate in the wake of George Floyd’s killing suggests that more Jamaicans are willing to openly acknowledge that light skin bestows privilege and that this is a form of racism. And this includes not just those who have been at the receiving end of colourism. One light-skinned man, for instance, tweeted that he knew he was often treated better because of the colour of his skin. 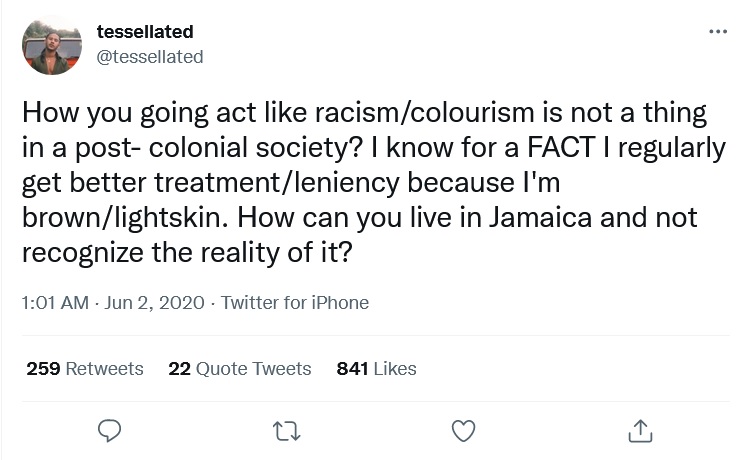 But there are also still many who argue that racism is something that happens in the US and that “classism” takes place in Jamaica. In other words, that the fact that some Jamaicans get good jobs or the best seat in a restaurant is simply because of their class privilege and has little or nothing to do with skin colour.

Since Jamaica gained independence in 1962, the country has witnessed various “racial eruptions” – racial incidents that have led to a public debate about race and colour. One infamous case was the so-called Skyline incident in 1972 when dark-skinned housing minister Anthony Spaulding accused the Skyline hotel of racism for having refused to serve him and his friends because one of his friends had refused to remove his cap as was hotel policy.

But none of these incidents have changed the racial status quo: light skin continues to bestow privilege in both the public and private spheres. For instance, various studies have shown a close correlation between wealth and skin colour.

It remains to be seen whether this most recent racial eruption will lead to action to address colourism. The fact that it is now being more openly addressed is a positive step forward.

This article was originally published in The Conversation on 22 June 2020. It can be accessed here: https://theconversation.com/black-lives-matter-in-jamaica-debates-about-colourism-follow-anger-at-police-brutality-140754

Henrice Altink is Professor in Modern History and Co-Director of the Interdisciplinary Global Development Centre (IGDC). She joined the department in 2004. Henrice has been actively involved with the Society for Caribbean Studies (SCS) for many years and is currently an executive member of the Social History Society and deputy editor of Women’s History Review. Henrice’s main research focuses on social inequalities in the Caribbean. She has worked extensively on gender during slavery and in the post-emancipation period and her more recent work focusses on race during the decolonisation period.