In 1990, the Intergovernmental Panel on Climate Change (IPCC) issued its first assessment report on the state of climate change science. The synthesis of the sixth assessment report will be released later this year. But we can guess its messages: we are changing the climate with adverse consequences and we must urgently cut emissions. So after all this time, is the IPCC still useful?

To tackle this question, I recently organised a webinar featuring two long-standing IPCC authors, Lisa Schipper and Mark Pelling, who were joined by Silke Beck who has researched the IPCC since 1994 without, like me, ever directly contributing to it. My UCL colleague, prominent climate change researcher Sonja Ayeb-Karlsson chaired.

What is the IPCC?

The IPCC was created by the United Nations. It synthesises and assesses the science of natural and human-caused climate change, the impacts and risks, and our options for and consequences of action. Member states appoint IPCC scientists and the governments must approve all reports. They are not shy about trying to remove material.

The IPCC publishes many different reports, the most notable of which are the full assessment reports every five to seven years. The latest one, the sixth, has been published over the past year following a COVID-19-related delay. The full technical report across three working groups comprises thousands of pages. It is meant to be policy neutral and policy relevant, but not policy prescriptive.

A headline-grabbing “Summary for Policy Makers” from each working group usually spans dozens of pages. It must be politically acceptable and so tends to diverge from the carefully nuanced science. One analysis called it “the potentially least robust aspect of the Assessment Report process”.

The story is the same

Over the years, the baseline message hasn’t really altered, especially in terms of public perception that, in summary; humans are changing the climate rapidly and substantively. Consider the BBC’s online news reporting, for instance. The first sentence in its coverage of the 2007 IPCC fourth assessment termed human causation of climate change “very likely”. 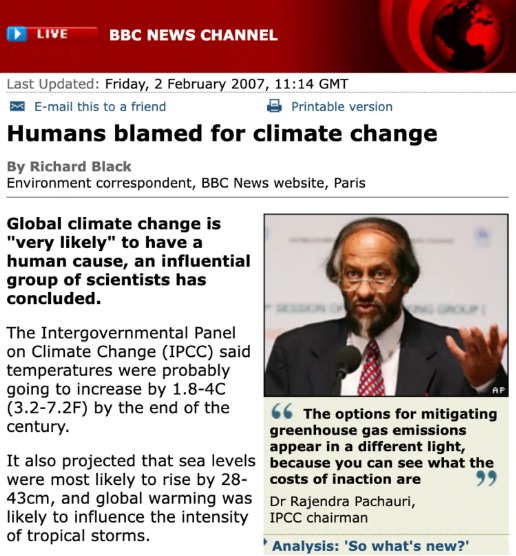 Its report on the 2013 IPCC fifth assessment began “scientists are 95% certain that humans are the “dominant cause” of global warming since the 1950s”. Last year’s story about the IPCC sixth assessment, written by the same reporter, started “Human activity is changing the climate in unprecedented and sometimes irreversible ways”. From highly confident to entirely confident in 14 years.

Is the IPCC needed?

Though we are certain about the basics, much climate science remains unknown or uncertain. Challenges range from the role of clouds to the application of economic models. These gaps should not impede action based on what we do know about the science.

These days the IPCC contributes little to climate change science. The three webinar speakers all agreed that the IPCC had fulfilled its original purpose. But they raised fundamental concerns regarding who is involved, whose voices are heard, and the effort required to attempt to fulfil the IPCC’s mandate (and not quite get there). The IPCC has made some important strides towards widening representation, although it still has long way to go to fully include, among others, indigenous peoples.

Speakers also suggested the IPCC’s reports are too technocratic and placed too much faith in technology. Also, a conflict of interest sometimes arises when IPCC authors synthesise and assessing their own published science.

Limitations in the IPCC’s process were flagged too. Reaching real consensus and consistency is hard within the mandate. While the IPCC strives for balanced, diverse, and representative authorship, it does not necessarily succeed, even in regional representation. The work is effectively unpaid which favours authors willing to give their time and who work for amenable institutions.

Authors gain networks and perceived prestige, yet the impact on careers might not always be positive. Schipper lamented: “It has taken a huge amount of our time. And, for instance, my contract is expiring in Oxford because I haven’t had time to find research funding because I’ve been so engaged with the IPCC process.” It can be even worse for authors based in unsupportive countries or where the IPCC’s messages do not sit well with their governments.

Those not well-versed in climate change science tend to venerate the IPCC as a beacon of fact and authenticity. Without knowing the mandate, process, power relations, knowledge biases and inconsistencies, many hold up the IPCC as an untouchable icon. They do not see the bureaucracy and strong personalities shaping the reports as much as the science.

Can the IPCC move forward?

The speakers were not willing to abandon the IPCC at this stage, instead they wanted to see constructive reform. They were particularly hoping to enhance science-policy interactions. This means that policy makers must want to engage with science which, everyone agreed, is not always the case.

And while countries edit out mentions that portray themselves negatively, more targeted and specific reports, including at the country level, could be an important direction. Shorter, more focused reports were deemed to be most useful.

These would not only narrow the time gap between reports, but would also help to circumvent the impossibility of reviewing the masses of science being published. Searching a single academic publisher for peer-reviewed papers relevant to climate change in 2022 revealed over 33 published each day.

Rather than adopting their advice, the webinar’s speakers noted how the IPCC continues to move toward longer reports, more complicated rules, and increasingly futile attempts to embrace all the published science. In tandem, substantive action addressing human-caused climate change must succeed before the seventh IPCC assessment report is expected to be completed.

Rather than having galvanised the needed responses, the IPCC might then merely provide confirmation that we could have acted, but now it is too late.

This article was originally published in The Conversation on 20 May 2022. It can be accessed here: https://theconversation.com/climate-change-the-ipcc-has-served-its-purpose-so-do-we-still-need-it-183550

Ilan Kelman – Professor of Disasters and Health at the UCL Institute for Risk and Disaster Reduction and the UCL Global Health Institute in the UK, as well as Professor II at the University of Agder in Norway. His overall research interest is linking disasters and health, including the integration of climate change into disaster research and health research. He focuses on islands and the polar regions. Climate change is one hazard driver amongst many, so climate change adaptation becomes a subset of disaster risk reduction which sits within development and sustainability processes.