As a case study in how to implement organisational change, Elon Musk’s actions at Twitter will go down as the gold standard in what not to do.

Among other things, the evidence shows successful organisational change requires: a clear, compelling vision that is communicated effectively; employee participation; and fairness in the way change is implemented. Trust in leaders is also crucial.

Musk, the world’s richest man, appears in a hurry to make Twitter into a money-spinner. But it takes time to understand the requirements for successful organisational change. Two in three such efforts fail, resulting in significant costs, a stressed workforce and loss of key talent.

Change management never quite goes to plan. It’s hard to figure out whether Musk even has a plan at all.

Since taking over Twitter on October 27, Musk has stopped employees working from home, cancelled employee lunches, and laid off about 3,700 employees – roughly half of Twitter’s workforce. Many realised they had been sacked when they could no longer access their laptops.

Just days later it emerged that Musk had a team of snoopers comb through employees’ private messages on Slack, firing those who had criticised him.

Then, on Wednesday last week, Musk sent an ultimatum to staff to pledge commitment to a new “extremely hardcore” Twitter that “will mean working long hours at a high intensity”. Employees had until 5pm the next day to accept, or take a severance package.

Musk appears not to have anticipated this reaction. As the “hardcore” deadline approached, he started bringing key staff into meetings, trying to convince them to stay.

He also walked back his working-from-home ban, emailing staff that “all that is required for approval is that your manager takes responsibility for ensuring that you are making an excellent contribution”.

It was unsuccessful. So many employees decided to leave that on Friday Twitter locked all staff out of its office until Monday amid confusion as to who actually still worked there and should have access.

Layoffs and restructuring are common in organisational change. But the way they are managed has significant effects on those who are leaving, as well as those who remain. If you want employees to be committed and to respond to a crisis, telling them they are lazy and threatening them won’t help.

But what about SpaceX and Tesla – the companies on which Musk has built his fame and fortune? Doesn’t their success prove he is a good leader?

When there is a common mission to achieve something extraordinary or which hasn’t been done before, employees will often willingly work extremely long hours in difficult situations.

They will choose to go above and beyond and work long hours if they feel aligned with the organisation’s purpose or that their work matters. But the key point here is that they choose.

As one Twitter employee tweeted after Musk’s “hardcore” email:

I didn’t want to work for someone who threatened us over email multiple times about only ‘exceptional tweeps should work here’ when I was already working 60-70 hours weekly.

Both Tesla and SpaceX have many unhappy employees, with lawsuits filed over working conditions and Musk’s management style.

He has been commended for his thinking on iterative design and solving engineering problems. Challenging old models that may no longer be useful is important. But the fundamentals of leadership and organisational change are still essential – and on these, Musk falls woefully short.

While his employees – real people who aren’t billionaires and who have rent or mortgages to pay – were grappling with what being “hardcore” even means, and how that might impact their ability to have a life outside work, Musk was tweeting about his poll on whether former US president Donald Trump should be allowed back on the platform.

Then, after Trump declined to return, Musk tweeted the following: 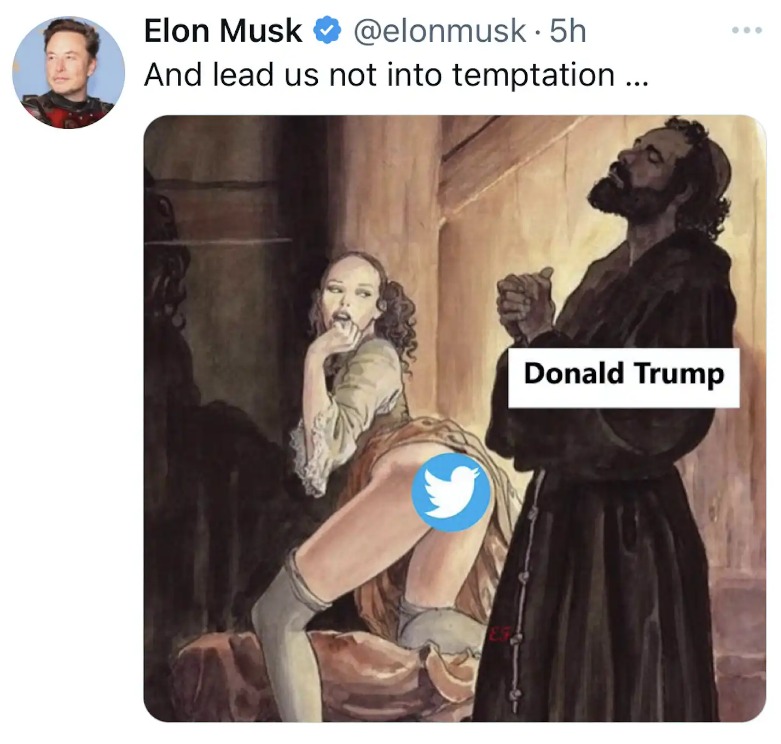 The idea of any other chief executive sending such a message on social media almost defies belief.

Some have suggested this whole debacle is an ego trip for Musk – a theory lent credence by his attempt to get out of the deal. His actions pose a significant risk to the business even if there are still enough employees around to keep it working.

Almost immediately upon the acquisition’s close, a wave of racist and antisemitic trolling emerged on Twitter. Wary marketers, including those at General Mills, Audi and Pfizer, slowed down or paused ad spending on the platform, kicking off a crisis within the company to protect precious ad revenue.

But even more powerful than the advertisers, Roth noted, are the digital storefronts of Apple and Google:

Failure to adhere to Apple’s and Google’s guidelines would be catastrophic, risking Twitter’s expulsion from their app stores and making it more difficult for billions of potential users to get Twitter’s services.

Even if the little blue bird is still flying for now, the people-led systems that keep it aloft are under significant threat.

This article was originally published in The Conversation on 22 November 2022. It can be accessed here: https://theconversation.com/elon-musks-hardcore-management-style-a-case-study-in-what-not-to-do-194999

Libby has appeared on ABC TV’s Catalyst and The Drum featuring her research, Sunrise on Channel 7, ABC News and spoken at TEDx .