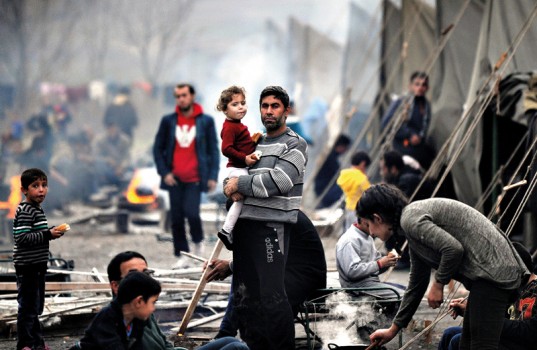 The current Syrian refugee crisis provides an opportunity to look beyond the headlines and to locate it in a broader historical context. Peter Gatrell explores in this article the history of Syria as a refugee-hosting state, the historical significance of journeys made by other refugees, and the policies adopted by governments in relation to refugees.

The Syrian refugee crisis has profound political and social consequences. Obviously those consequences have been most acutely felt by the millions of Syrians who have fled their country as a result of the prolonged civil war or who have been internally displaced, and it’s worth bearing in mind this fundamental point. Powerful media images of the human tragedies unfolding in the waters of the Mediterranean have led to an outpouring of sympathy and practical assistance on the part of people in a more fortunate situation. Yet at the same time, we have also witnessed a frenzied reaction on the part of European states seeking to secure their borders against what appears to be an unstoppable ‘incursion’. In this short piece, I want to reflect on the significance of these events by adopting a historical perspective.

Peter Gatrell is the author of a trilogy of books on refugee history, most recently The Making of the Modern Refugee (Oxford University Press, 2013). He teaches at the University of Manchester where he is co-director of the Centre for the Cultural History of War and affiliated to the Humanitarian and Conflict Response Institute.

References
1. I have explored this history in Peter Gatrell, The Making of the Modern Refugee (Oxford University Press), inspired in part by the work of anthropologist Liisa Malkki, ‘Speechless emissaries: refugees, humanitarianism, and dehistoricization’, Cultural Anthropology, 11, no. 3, 1996, 377-404.
2. An excellent guide to these histories is Dawn Chatty, Displacement and Dispossession in the Modern Middle East (Cambridge University Press, 2011)
3. Gatrell, The Making of the Modern Refugee, pp. 207-11.
4. See Lynda Mannik, Photography, Memory, and Refugee Identity: the Voyage of the SS Walnut, 1948 (University of British Columbia Press, 2013).
5. Jessica Reinisch, ‘History matters.. but which one? Every refugee crisis has a context’, 29 September 2015, at http://www.historyandpolicy.org/policy-papers
6. Gatrell, The Making of the Modern Refugee, pp. 55-58.
7. Irial Glynn, ‘The genesis and development of Article 1 of the 1951 Refugee Convention’, Journal of Refugee Studies, 25, no. 1, 2012, 134-48.
8. Peter Gatrell, Free World? The campaign to save the world’s refugees, 1956-1963 (Cambridge University Press, 2011).
9. Georgia Cole, ‘Refugee or economic migrant? Join the dots Theresa May’, https://www.opendemocracy.net/author/georgia-cole