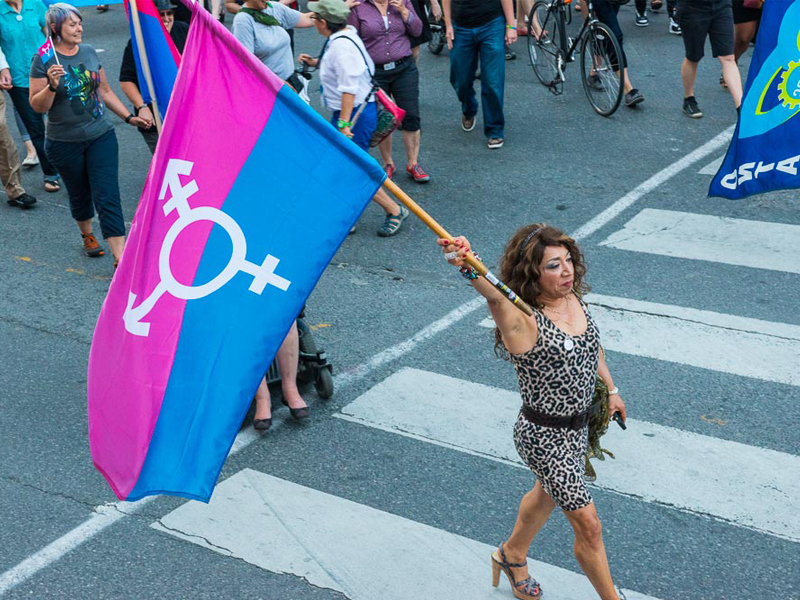 Transgender politics today function very similarly to auto da-fé where the subject must not only have something to confess, she is obligated to have an identity (religion) as imposed upon her by the current gender orthodoxy. The Draconian tactics used to silence valid critiques of gender identity through the veritable postmodern auto da-fé of our time should make any sentient being – woman and man alike – extremely concerned.

Over the past year, one might think that transgender persons were 51% of the population given the enormous media concentration lent to this subject. The focus on identity over the material reality of the body is at an unprecedented high with organisations which instruct people how to be a better “trans ally” and publications which, on a regular basis, admonish women for discussing their bodies by asking them to cease referring to the female body because it is “triggering”. That one speaks of the actuality of salary disparity between men and women in the UK or the rates of sexual violence perpetrated against women often sparks vituperative backlash from the radical right of MRAs (men’s rights advocates). Yet, in recent years there is an even more conservative group of individuals who have lashed out at women and self-declared feminists specifically: transgender rights activists. And their weight in mainstream politics is not negligible nor is it, I believe, coincidental to the waning rights of women to access abortion services in the United States or to the rise in domestic abuse that many women suffer in the UK to include a murder of two women a week in England and Wales at the hands of a current or former partner. While women in some prisons struggle to obtain basic hygiene products, in others women are sent fifty miles away so that they can give “makeovers” to male transgender prisoners, because you know, putting makeup on ourselves is endemic to the hollowed out female condition.

And here is where things get dicy for the identitarians of today, for it simply does not matter if a female identifies as non-binary, gender queer, as a transgender man, or an otherkin – the reality is that the female body is the sole reason why women need access to safe abortions, to proper medical care for pregnancy, and to safe spaces in shelters and prisons. Issues of personal safety are specific to women’s bodies and are highly politicised because of the somatic differences in male and female bodies, because what happens to her body is terms of violence, rape, and reproduction mirrors the social structures of gender which are extremely and uniquely political. That pay decreases when women take over jobs which men formerly dominated, that girls in the UK are experiencing record-high levels of sexual harassment and aggression, that femicide – to include sex-specific abortion – is committed at alarming rates around the planet, that unemployed men tend to spend their time either watching TV or returning to school while unemployed women tend to clean the house and take care of others, or that hackers can receive more jail time than rapists are all social facts which speak to the reality of how sex discrimination functions.

Sadly, the UK Green Party has taken to referring to women as “non-males” in order to appease those whose identity politics seeks to steamroll the very reality of the physical, sexed body. And dare you question that males cannot possibly experience menstruation, not only will you be labelled a “transphobe”, but you will be linked to products which simulate the verboten female menses “proving” that males menstruate. On the American front, the healthcare provider, Planned Parenthood, in response to pressure from the trans lobby, has removed the specificity of pregnancy and menstruation as something women experience. Now “pregnant person” replaces “pregnant woman” and the term “menstruator” is used instead of “woman” in order to “include” transgender men and non-binary persons. The problem here is glaring since how we see ourselves does not define the reality of our oppression, nor the reality of the body. Females get pregnant regardless of how they identify. Were that not the case, women would simply identify their way out of pregnancy, pay inequality, and rape. Reality, however, does not function that way and logomachy cannot change social and physical facts.

Julian Vigo, PhD, is a public scholar, filmmaker, artist, permaculturalist, and human rights consultant. A specialist in contemporary ethnography, cultural studies, cinema, postcolonial theory, and media and gender studies, she has taught at universities across the world and writes for writes for Truthout, CounterPunch, HK01, a-n, and n.paradoxa. Her latest book is Earthquake in Haiti: The Pornography of Poverty and the Politics of Development (2015). For other articles written by Julian Vigo see: Medium, Endoplasm, and OneWorld. Julian Vigo’s portal is lubellule.com and she can be reached at [email protected].