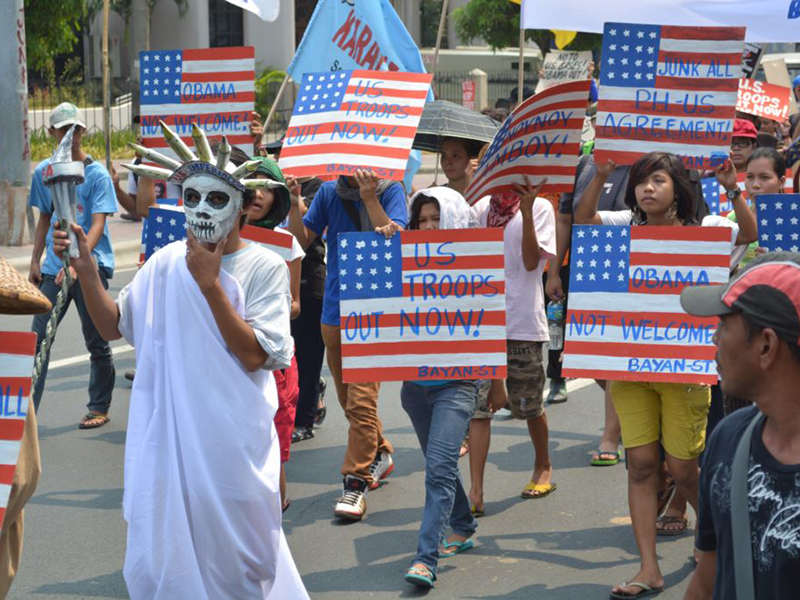 Guerilla Incursions from the Boondocks

“A howling wilderness” was what General Jacob Smith ordered his troops to make of Samar, Philippines. He was taking revenge for the ambush of fifty-four soldiers by Filipino revolutionaries in September 1901.

After the invaders killed most of the island’s inhabitants, three bells from the Balangiga Church were looted as war trophies; two are still displayed at Warren Air Force Base, Cheyenne, Wyoming. Very few Americans know this. Nor would they have any clue about the 1913 massacre of thousands of Muslim women, men and children resisting General Pershing’s (image right) systematic destruction of their homes in Mindanao where President Rodrigo Duterte today resides.

Addressing this dire amnesia afflicting the public, both in the Philippines and abroad, newly-elected President Duterte began the task of evoking/invoking the accursed past. He assumed the role of oral tribune, with prophetic expletives.

Like the Filipino guerillas of Generals Lukban and Malvar who retreated to the mountains (called “boondocks” by American pursuers from the Tagalog word “bundok,” mountain), Duterte seems to be coming down with the task of reclaiming the collective dignity of the heathens–eulogiSed by Rudyard Kipling, at the start of the war in February 1899, as “the white men’s burden”. The first U.S. civil governor William Howard Taft patroniSingly adopted this burden of saving the Filipino “little brown brother” as a benighted colonial ward, not a citizen.

The Filipino-American War of 1899-1913 occupies only a paragraph, at most, in most US texbooks, a blip in the rise of the United States as an Asian Pacific Leviathan. Hobbes’ figure is more applicable to international rivalries than to predatory neoliberal capitalism today, or to the urban jungle of Metro Manila. At least 1.4 million Filipinos (verified by historian Luzviminda Francisco) died as a result of the scorched-earth policy of President McKinley.  His armed missionaries were notorious for Vietnam-style “hamletting”. They also practised the “water-cure”, also known as “water-boarding”, a form of torture now legitimised in a genocidal war of terror (Iraq, Afghanistan) that recalls the ruthless suppression of Native American tribes and dehumaniSation of African slaves in the westward march of the “civilising Krag” to the Pacific, to the Chinese market.

Today the struggle at Standing Rock and Black-Lives-Matter are timely reminders. Stuart Creighton Miller’s 1982 book, “Benevolent Assimilation”, together with asides by Gabriel Kolko and Howard Zinn, recounted the vicissitudes of that bloody passage through Philippine boondocks and countryside.

Mark Twain exposed the hypocrisy of Washington’s “Benevolent Assimilation” with searing diatribes, as though inventing the “conscience” of his generation. William James, William Dean Howells, W.E.B. DuBois and other public intellectuals denounced what turned out to be the “first Vietnam” (Bernard Fall’s rubric).

Not everyone acquiesced to Washington’s brutal annexation of the island-colony.

It was a learning experience for the conquerors. In Policing America’s Empire, Alfred McCoy discovered that America’s “tutelage” of the Filipino elite (involving oligarchic politicians of the Commonwealth period up to Marcos and Aquino) functioned as a laboratory for crafting methods of surveillance, ideological manipulation, propaganda, and other modes of covert and overt pacification. Censorship, mass arrests of suspected dissidents, torture and assassination of “bandits” protesting landlord abuses and bureaucratic corruption  in the first three decades of colonial rule led to large-scale killing of peasants and workers in numerous Colorum and Sakdalista uprisings.