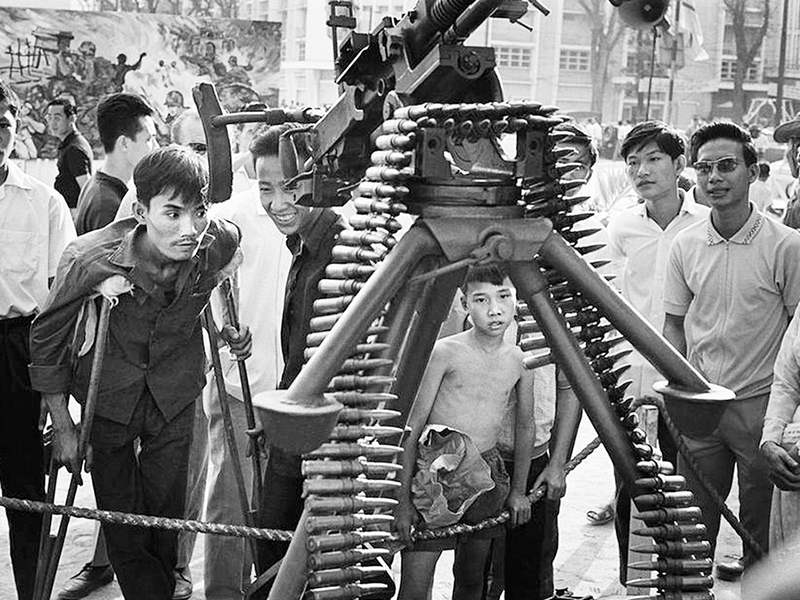 Forty years after the American war in Vietnam ended in 1975, the central and most critical issue is the “struggle for memory”, an ideological war over the most accurate and truthful story of the conflict. Whose ideas about the war will prevail?

The Vietnam War was an example of imperial aggression. According to historian Michael Parenti: “Imperialism is what empires are all about. Imperialism is what empires do,” as “one country brings to bear…economic and military power upon another country in order to expropriate [its] land, labour, natural resources, capital and markets.” Imperialism ultimately enriches the home country’s dominant class. The process involves “unspeakable repression and state terror”, and must rely repeatedly “upon armed coercion and repression”. The ultimate aim of modern US imperialism is “to make the world safe” for multinational corporations. When discussing imperialism, “the prime unit of analysis should be the economic class rather than the nation-state”.1

US imperial actions in Vietnam and elsewhere are often described as reflecting “national interests”, “national security”, or “national defense”. Endless US wars and regime changes, however, actually represent the class interests of the powerful who own and govern the country. Noam Chomsky argues that if one wishes to understand imperial wars, therefore, “it is a good idea to begin by investigating the domestic social structure. Who sets foreign policy? What interest do these people represent? What is the domestic source of their power?”2

The war was waged “against the entire Vietnamese population”, designed to terrorise them into submission. The United States “made South Vietnam a sea of fire as a matter of policy, turning an entire nation into a target. This is not accidental but intentional and intrinsic to the US’s strategic and political premises.” In such an attack “against an entire people…barbarism can be the only consequence of [U.S.] tactics”, conceived and organised by “the true architects of terror”, the “respected men of manners and conventional views who calculate and act behind desks and computers rather than in villages in the field”.3 The US abuse of Vietnamese civilians and prisoners of war was strictly prohibited by the Geneva Convention, which the United States signed. US officials and media pundits continue to assert that torture is a violation of “our values”. This is not true. Torture is as American as apple pie, widely practiced in wars and prisons.

The war depended on government lies. Daniel Ellsberg exposed one such lie that had a profound impact on the eventual course of the conflict: the official story of the Tonkin Gulf crisis of August 1964. President Johnson and Defense Secretary Robert McNamara told the public that the North Vietnamese, for the second time in two days, had attacked US warships on “routine patrol in international waters”; that this was clearly a “deliberate” pattern of “naked aggression”; that the evidence for the second attack, like the first, was “unequivocal”; that the attack had been “unprovoked”; and that the United States, by responding in order to deter any repetition, intended no wider war. All of these assurances were untrue.4

John Marciano attended the first Students for a Democratic Society (SDS) March against the American War in Vietnam on April 17, 1965 – and was a founding member of the SDS chapter at SUNY Buffalo. Professor Emeritus at SUNY Cortland, he has written a number of books and chapters dealing with the American War in Vietnam: Teaching the Vietnam War with Willliam L. Griffen, Foreword by Howard Zinn, 1979; Civic Illiteracy and Education, 1997 (with an endorsement by Noam Chomsky); “Civic Literacy at Its Best: The ‘Democratic Distemper’ of the Students for a Democratic Society (SDS),” in Defending Public Schools, 2004; “Civic Illiteracy and American History Textbooks: The U.S.-Vietnam War,” in Critical Civic Literacy: A Reader; and The American War in Vietnam: Crime or Commemoration?, Monthly Review Press, 2016. He was chair of the Tompkins County (Ithaca, NY) Human Rights Commission (1991-96).

Is this the end of trickle-down economics?

Influential Books About Women Empowerment and Being Your Own Boss

Happiness Is A Place Between Too Little And Too Much

What Are The World’s Most Traded Currencies?

How AI Is Innovating The Legal Industry