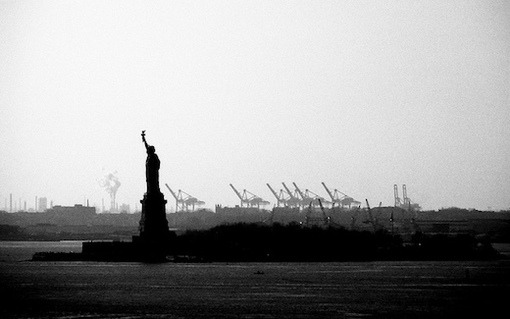 With his white supremacist ideology and racist contempt for Muslims on full display, President Trump has issued an executive order banning all Syrians and people from seven predominantly Muslim nations from entering the United States. In doing so, he has not only made visible, and without apology, his embrace of the frenzied lawlessness of authoritarianism, he has also put into place an additional series of repressive policies for the creation of what might be called a democracy in exile.

In response to the religious ban targeting Muslims and Syrian refugees escaping a devastating war, carnage, and state violence, thousands of people across the country have mobilised with great speed and energy to reject not just a possibly unconstitutional ban, but also what this and other regressive policies herald as a possible model for the future. Many writers have focused on the massive disruption this shoot-from-the hip piece of legislation has and will produce for students, visa holders, and those entering the United States after finishing a long vetting process.

As an editorial in the Washington Post pointed out, Trump’s immigration order is “breathtaking in scope and inflammatory in tone.”1 Moreover, it lacks logic and speaks to “the president’s callousness and indifference to history, to America’s deepest lessons about its own values”.2 Given that it was issued on Holocaust Remembrance day points not only to Trump’s moral callousness, if not outright ignorance,  but also to the power of chief White House strategist, Steve Bannon, a white-supremacist and anti-Semite, who played a key role in drafting it.

Not only will this immigration order further threaten the security of the United States given its demagogic design and rhetoric of exclusion by serving as a powerful recruiting tool for terrorists, it also legitimates a form of state sponsored racial and religious cleansing. Chicago Cardinal Blasé Cupich, hardly a radical, was right in stating that the design and implementation of the order was “rushed, chaotic, cruel, and oblivious” to the demands and actualities of national security, but that it had “ushered in a dark moment in U.S. history.”3 Dark, indeed, because the impetus behind the ruling signals not only a society that has stopped questioning itself, but also points to its immersion into a mode of totalitarianism in which a form of social engineering is once again being constructed around an assault on religious and racial identities. What we are witnessing under Trump and his chief ideologues is a purification ritual motivated by xenophobia and the attempt to create a white public sphere free of those who do not share the ideology of white Christian extremists.

Henry A. Giroux currently holds the McMaster University Chair for Scholarship in the Public Interest in the English and Cultural Studies Department and a Distinguished Visiting Professorship at Ryerson University. His most recent books are America’s Education Deficit and the War on Youth (Monthly Review Press, 2013) and Neoliberalism’s War on Higher Education (Haymarket Press, 2014). His web site is www.henryagiroux.com.