Food prices, like almost everything else, are rising fast. There have recently been warnings of “apocalyptic” costs, and a declaration that the “era of cheap food” is over.

Such announcements have been linked to creaking economies trying to recover from the pandemic and the effects of war in Ukraine, one of the world’s largest exporters of food.

But to fully understand why food prices cannot be kept down, and what could be done to help struggling households, we need to look at how our supermarkets actually make money. My research shows that the current system has been balanced on a knife edge for some time.

The fact is that most of the income from selling food with very low margins at very high volumes is swallowed up in overheads such as payroll and the costs of running stores and distribution centres. This has three effects on supermarket economics worth considering the next time you stock up on groceries.

Firstly, supermarkets only make a decent profit if people buy convenience food, treats and non-food items (everything from toilet paper to fuel and clothing). Seven out of the top ten items that bring in the most money for supermarkets fall into the categories of alcohol, snacks and confectionery.

One influential book on the subject argues supermarkets need to ensure – through shop design and promotion – that customers buy at least some higher margi items (regardless of their intention when they enter the store).

Supermarkets also need to be competitive by offering great deals on cheap, bulk, long-life foods such as cereals and pasta, to provide customers with savings which they may then spend on the non-food items and higher margin treats. If there is generally less money in people’s pockets, due to inflation and a cost-of-living crisis, they will be generally less inclined to buy these discretionary (and more profitable) items, making the supermarket less profitable.

From this perspective, the recent controversial announcement that multibuy deals are now not being banned in the UK is in fact good news for the retailers.

Secondly, food is cheap in supermarkets because they use their bargaining power to get large volume discounts. When Tesco was founded in the early 1960s, consumers benefited because it challenged the previous situation which had favoured the large manufacturers and processors in setting prices.

This lowers prices for shoppers, but severely impacts earnings for the supermarket. And once prices cannot be pushed down any further – with cow’s milk, the price paid to producers is mostly at or below the cost of production – charging suppliers to market and promote their products is one of the few tools available for a supermarket to make money.

Information about this kind of “commercial income” can be found in the notes at the back of retailers’ annual financial reports. I have analysed these, and found that without commercial income, in 2021 very few supermarkets would have made any profit at all.

But there is a limit to bargaining and fee earnings. And when the prices of raw ingredient, fuel, financing and packaging are all rising, supermarkets will have to give way. It is likely they will have to raise prices for customers in order to maintain stocks and keep their 365-day 24-hour model going. Many food producers have already been pushed as low as they can go.

Thirdly, around 80% of the cost of the food we buy is simply the overheads of providing shops, factories, transport, distribution centres and production. If fuel goes up, so does the cost of the infrastructure – and then the cost of groceries.
A related issue is that cheap food is a real benefit for those who have storage, particularly fridge freezers. Shoppers overstocking at home benefits the supermarkets, but we know that around one third of all UK food is wasted. So we end paying more, but end up throwing the food away. 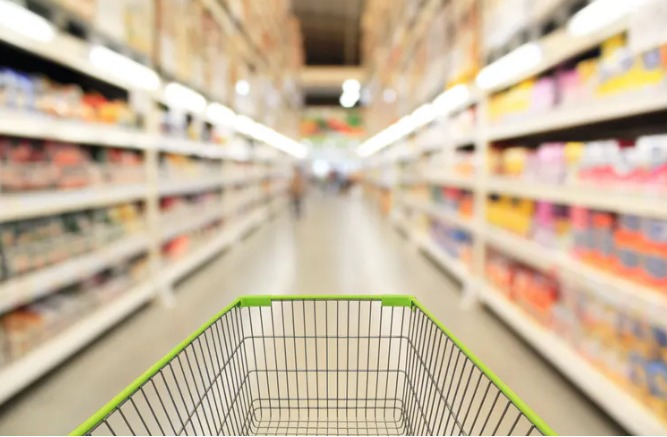 To achieve a fair, sustainable, healthy and affordable food system we need to tackle the overheads and waste to keep costs down. With this aim, some supermarkets are investing in artificial intelligence systems to track and manage food waste more effectively, which in turn should bring better inventory management and forecasting. That would contribute to less wasted products throughout the entire system.

Shorter supply chains would cut down transportation costs as does reducing the range of products on offer (which is effective but not always popular with consumers). Away from the supermarket shelves, there is research which suggests that the best way to make sure the poorest can afford food is to increase incomes through living wages, universal credit or a universal basic income.

But supermarkets could still play a major role. The current system, which relies on some consumers buying large quantities of food, some of which is unhealthy and some of which will be thrown away, is a model in desperate need of change.

This article was originally published in The Conversation on 20 May 2022. It can be accessed here: https://theconversation.com/inflation-the-supermarket-business-model-is-too-fragile-to-shield-customers-from-rising-food-prices-183408

Lisa Jack – Professor of Accounting in the Faculty of Business and Law, and also former President of the British Accounting and Finance Association (2015-2020), a learned society for academics based in the UK. She leads the Food Cultures in Transition Research Cluster at the University of Portmouth.