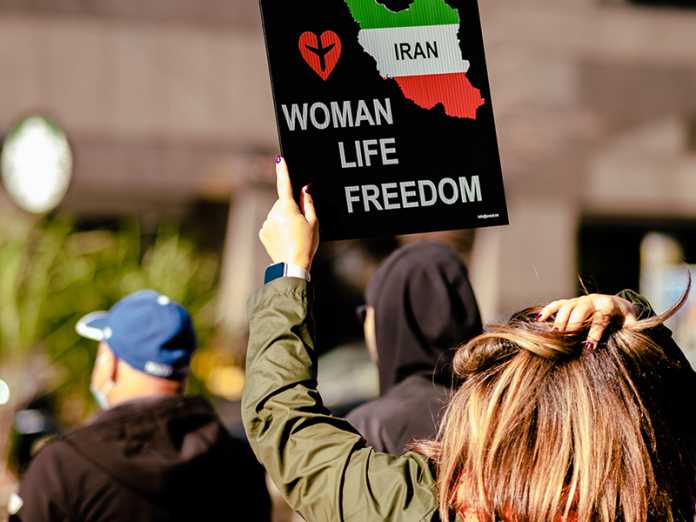 Until recently, most people outside of Iran had never heard of the country’s morality police, let alone followed their wider role in the region. But on Sept. 16, 2022, the death of Jina Mahsa Amini sparked widespread protests in the streets of Iran and elsewhere that have shown no signs of abating. Amini had been in the custody of Gasht-e-Ershad, the Persian name of this notorious police force, for “improper wearing of hijab.”

Yet, there were those who doubted the comments and called it a “false flag” on the part of those in power. A few noted that even if the morality police were abolished and the mandatory wearing of the hijab repealed, the regime would still need to be held accountable for all of its human rights violations.

These sentiments have formed the basis of a three-day nationwide strike that began on Dec. 5 and has shuttered thousands of shops, including those in the historic Grand Bazaar in the heart of Tehran, bringing the economy of the country to a grinding halt.

But who are the morality police? Where did they come from? And what is their history during and before the Islamic Republic of Iran?

A vice squad in context

The mandate and power of morality police date back to before the Islamic Revolution that shook Iran in 1979, and their reach has extended throughout the Middle East.

The Quran says that it is imperative that religious leaders “ensure right and forbid wrong.” To carry this out, beginning at the time of the Prophet Mohammad, public morals were overseen by market inspectors referred to as muhtasib.

As a scholar of gender and feminism in the Middle East, I’ve studied the long history of debates about the role of Islam in regulating morality. The earliest evidence of a muhtasib, interestingly, was a woman selected in Medina by the prophet himself.

Over the centuries, the mandate of the muhtasib became focused on regulating dress, particularly for women. While these market inspectors were recorded as issuing fines and occasional lashings, they did not have the same level of authority as the judiciary.

By the early 20th century, however, the muhtasibs had transitioned into the vice squads, patrolling the streets to make sure people were complying with Islamic values. It was mostly in Saudi Arabia under the influence of Wahhabism that morality police forces first gained prominence and momentum. The first modern morality police force, an official committee charged with “commanding right and forbidding wrong,” was formed in the Kingdom of Saudi Arabia in 1926. Comprised mostly of men, the force was charged with enforcing modest dress, regulating heterosocializing – engagement with members of the opposite sex if unmarried or unrelated – and ensuring citizens attended prayer.

By 2012, more than one-third of the 56 countries making up The Organization for Islamic Cooperation had some form of religiously informed  squadrons seeking to uphold right and forbid wrong as interpreted by Islamists in power.

A committee to enact revolution

In Iran, the morality police first appeared in the form of what was called the “Islamic Revolution Committee” following the 1979 Islamic Revolution. Ayatollah Ruhollah Khomeini, the Shiite cleric who led the revolution, wanted to control the behavior of Iranian citizens after too many years of what he and his fellow Islamists called a period of “secular Westoxication.”

The Islamic Revolution Committee, called “Komiteh” by many Iranians, was merged in the 1980s with the Gendarmerie, the first rural police force overseeing modern highways, to form the Law Enforcement Command of the Islamic Republic of Iran. In 1983, when mandatory veiling laws were passed, the Komiteh was tasked with ensuring these laws were upheld in addition to their other duties of ensuring right and forbidding wrong.

The current morality police – the Guidance Patrol or Gasht-e-Ershad – were given formal standing as an arm of the police force by President Mahmoud Ahmadinejad in 2005.

The group had been steadily growing in size since the 1980s, and by 2005 consisted of more than 7,000 officers. Women make up less than a quarter of the squadron but frequently accompany their male counterparts, who often arrive in unmarked vans and pour out into the streets in green uniforms. The women, meanwhile, wear black cloaks that cover them from head to toe.

For most of the 1980s and 1990s, the Komiteh was comprised of religiously devout followers of the regime who joined the force at the encouragement of clerics. However, by the early 2000s, Iran’s population was comprised mostly of young people. When Ahmadinejad made the Komiteh an official police force, a number of young men joined to fulfill their mandatory military conscription. This younger generation was more lax than their older counterparts, leading to inconsistent patrolling.

When President Ebrahim Raisi came to power in 2021, he emboldened the morality police to engage in harsh crackdowns on the Iranian populace, particularly in the cities. Raisi, like Khomeini and other clerics, used this vice squad to send a message to Iranian citizens that the regime is watching.

This clampdown, particularly when it led to the death of Amini, has been met with outrage by a large number of Iranians. While it is not yet confirmed whether or not the morality police have been disbanded, protesters are continuing to press the regime for change.

This article was originally published in The Conversation on 8 December 2022. It can be accessed here: https://theconversation.com/what-are-irans-morality-police-a-scholar-of-the-middle-east-explains-their-history-196023

Pardis Mahdavi, PhDis Provost and Executive Vice President at the University of Montana. She previously served as a Professor and Dean of Social Sciences at Arizona State University. Before her time in Arizona, she was Acting Dean of the Korbel School of International Studies at the University of Denver (2017-2019), after spending eleven years at Pomona College from 2006-2017 where she most recently served as professor and chair of anthropology and director of the Pacific Basin Institute at Pomona College as well as Dean of Women.