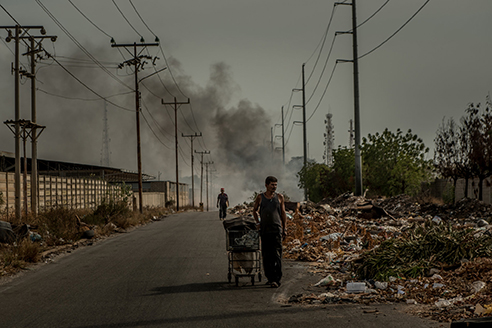 Venezuela’s Collapse Is the Worst Outside of War in Decades, Economists Say

Subtitle:
Butchers have stopped selling meat cuts in favor of offal, fat shavings and cow hooves, the only animal protein many of their customers can afford.

This introduction is accompanied by a picture of a man in rags, pushing a shopping cart through a garbage dump site. You, NYT, say it is in Maracaibo, Venezuela, the man looking for recyclables. The photo could be from anywhere, the same with a picture further down in the text – depicting a young woman nursing a baby in the dark – you say in a typical Venezuelan blackout.

This is a flagrant misrepresentation of what’s going on in Venezuela.

The New York Times is known for selecting photos from places of misery, could be slums from anywhere in the world, and placing them where it is most convenient to propagate a lie story – a story meant to demean a country in the public opinion, a country that the empire wants to subdue by bashing and insulting it – so the public – the braindead western public, notably in the US and Europe, will tolerate or even scream for a “humanitarian invasion” from the friendly
US of A.

Why don’t you NYT’s shameful liars tell the full truth?

Who is responsible for the collapse, the lack of food, medicine, blackouts – actually for all of the collapses that you described in your manipulating master piece of deceit and propaganda? – And many more ‘collapses’ that you don’t even mention? The NYT article compares Venezuela with “Zimbabwe’s collapse under Robert Mugabe, the fall of the Soviet Union, and Cuba’s disastrous unraveling in the 1990s”. The Times is completing its baseless preposterous accusation by saying, “the crumbling of Venezuela’s economy has now outpaced them all. Venezuela’s fall is the single largest economic collapse outside of war in at least 45 years, economists say.”

The economist your article quotes is none less than the former chief economist of the IMF, Harvard professor, Kenneth Rogoff, one of the most neoliberal, bordering on neofascist, economists you could have chosen. But that figures. Impressing with name calling. No matter how biased they are; no matter that they too defend the US hardline – invade Venezuela to safe the people.

Peter Koenig is an economist and geopolitical analyst. He is also a water resources and environmental specialist. He worked for over 30 years with the World Bank and the World Health Organization around the world in the fields of environment and water. He lectures at universities in the US, Europe and South America. He writes regularly for Global Research; ICH; RT; Sputnik; PressTV; The 21st Century; TeleSUR; The Saker Blog, the New Eastern Outlook (NEO); and other internet sites. He is the author of Implosion – An Economic Thriller about War, Environmental Destruction and Corporate Greed – fiction based on facts and on 30 years of World Bank experience around the globe. He is also a co-author of The World Order and Revolution! – Essays from the Resistance. Peter Koenig is a Research Associate of the Centre for Research on Globalization.

What Are We Doing Today to Prevent Our Company’s Next Ethical...

Is Europe Sleep-Walking into a Diplomatic Disaster with Iran?

Iraq – Why Doesn’t the US Move Out Despite the Iraqi...